It Was a Bloody Good Time! 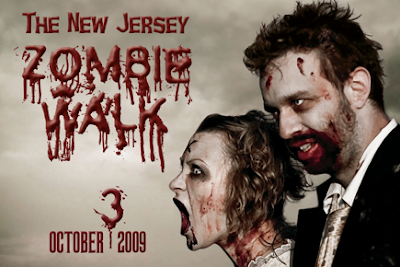 So ... what did you do this past weekend? I spent mine in Asbury Park, New Jersey with about 1,500 of the undead who lurched along the Asbury Park Boardwalk before invading the downtown area for more zombie fun and games including dancing to Michael Jackson's "Thriller".

This past Saturdays' New Jersey Zombie Walk was Amanda's first in the Garden State but Asbury Park is apparently getting used to having hordes of zombies descend as this is their third time the zombies have invaded with previous walks in October 2008 and May 2009. This past Saturday's event was possibly the biggest East Coast gathering of zombies yet though they're still working on an official "body count". In all honesty, it was a lot of fun and I almost wish I'd had the chance to be 'zombified' myself though I was there in photographer status only!

Darci, Dani, and Amanda the morning of the walk 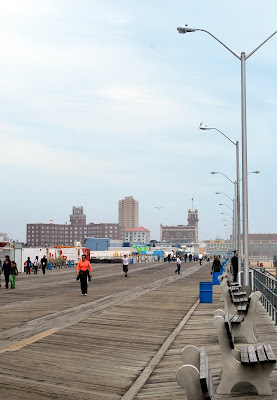 While the girls - with the exception of Darci who choose to remain amongst the living - transformed themselves into the undead, I kept an eye on the morning sky in the hopes that the rain that had been predicted would stay away as I'm sure there's not much worse than a wet zombie! Fortunately it did and shortly after 11:00 we made our way to the Carousel Building where make-up sessions were going on, vendor booths had been set up, and a handful of zombies had gathered.

The actual walk didn't start until 5:00 p.m. so the girls had plenty of time to stroll the boardwalk and get their pictures taken while frightening small children! I had plans to meet with Dianne, a New Jersey blogger, but unfortunately she wasn't able to make it much to the disappointment of both of us; we did have a chance to chat via cellphone for a little while and though it wasn't as nice as meeting in person, it was really nice to talk to her. We're going to shoot for a get-together in New York City a little later on and keep our fingers crossed that no unforeseen circumstances mess that one up, too. 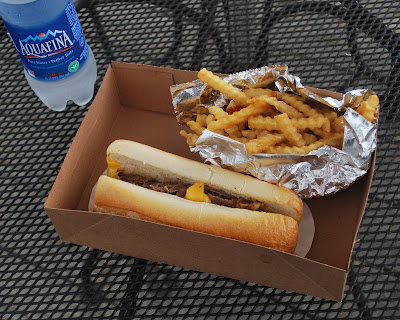 After talking to Dianne, I walked around and took some pictures of the boardwalk that I'll share with you later and then lunch seemed to be in order so I grabbed a Philly Cheesesteak and some fries to taunt the local seagulls with (!) at a spot that's been serving the Asbury Park Boardwalk for 50 years. Eventually 'my' zombies shambled over and had some lunch, too, as teenage zombies cannot live on brains alone and then I went to the car to take a nap before the actual walk began. What can I say? I'm old and had a 4-hour drive back to Connecticut to deal with later on!

By the time 5:00 rolled around and the zombies began lurching down the boardwalk, Amanda was pretty worn out from having already walked around for 6 hours so it was decided that we'd skip the downtown festivities and head back to Connecticut after she'd made the initial loop down the boardwalk and back up Ocean Avenue. Dani's father was going to be arriving shortly after that, too, and she and Darci had plans to go see "Zombieland" later that evening.

I could give you the history of Zombie Walks in general but I'm just going to tell you that even though they may sound strange, Zombie Walks have been around since 2003. "World Zombie Day™ was created in 2008 and with calls for Zombie Walks all across the globe, close to 32 cities worldwide reported over 7,500 zombies participated in the very first World Zombie Day on October 26th of that year. Obviously Amanda is not alone in this one!

With over 100 pictures to choose from, I put together the following video montage of still shots with - of course! - the music of Michael Jackson's "Thriller". Enjoy and who knows?, maybe next time you'll see me in front of the camera crying out for 'braaaiiinnnnsssss', too, as it sure looked like a lot of fun from where I was standing!