A reader left a comment on my post about the Taft Tunnel this past Tuesday that I thought I would address today as it just so happens that I have pictures of that of which she wrote:

"Sher said ... I've been there. But you were lucky to have a train come through that day. Now in the last picture, if you continue down along side the tracks (along the river) you will come across a small man made dam. It's an interesting area to hike."

Sher is absolutely right that there is, in fact, a small dam in the area of the Taft Tunnel which is appropriately named the Tunnel Dam and is located just a bit south of the railroad tunnel itself.

The dam is quite interesting in that it's an L-shaped dam - something I hadn't seen before I came across it last April, the first time I went exploring the Taft Tunnel. The dam is obviously used by Norwich Public Utilities as there's a power station located right next to it on the Norwich side of the Quinebaug River but I couldn't seem to find any information on their website in regards to it so honestly have no idea how old the Tunnel Dam is or much of anything else. Sometimes you can dig up all sorts of good stuff with a web search and sometimes you get nothing ... this is one of those cases! One thing I do know, though, is that there is a fish lift located on the dam just as there is one on the Greeneville Dam and a fish ladder on both the Taftville Dam and Occum Dam. 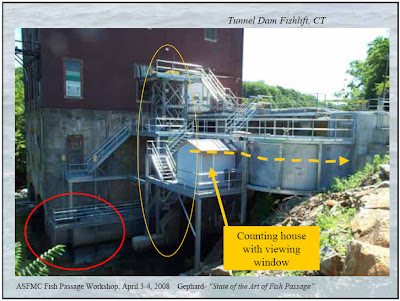 The picture above of the Tunnel Dam fish lift comes courtesy of the Atlantic States Marine Fisheries Commission and their paper on Fish Passage Issues Impacting Atlantic Coast States presented at a workshop on April 3rd & 4th, 2008 in Florida. The 260-page paper is somewhat daunting and technical when it comes to fish lifts and ladders and the such but I got a pretty good idea of what they were all about and how important they are. After all, fish can't very well go jumping up and over the dams that are put on rivers and they need some way to be able to get upstream to spawn or their numbers will die out, right?

Norwich Public Utilities offers tours of the fish lift at the Greeneville Dam in the spring, something I'm going to try to remember come next May so I can check it out and most likely take lots of pictures!

In the meantime, here are a couple more pictures of the Tunnel Dam which was running pretty good on Monday after all of the rain that we got last weekend. I'll be showing you some more dam pictures I took soon but for now, everyone have a great Saturday and a Happy Halloween!