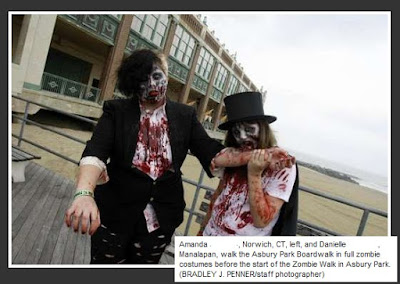 It's OK folks, the zombies just want some brains.
"Unnnhhhh!" cried one unpleasant undead.
Slowly, steadily, zombies made their way from Convention Hall to Press Plaza on Saturday where they ... Well, the zombies danced. The zombies danced to the late Michael Jackson's "Thriller.''
"Brraaiiinnnsss!' cried another ashen, reanimated corpse.
Others shrieked in agreement.
This is the third time within a year that a plague of zombies took over the city. The first was last October, the second was in May.
On Saturday, Zombies were on the boardwalk. They were in the streets. They sat outside bistros and bars, sipping drinks. They were on cell phones. They were smoking cigarettes. And, they even were paying for parking.
"You can go out and spit blood on your friends, you can roll around in the dirt and no one cares,'' said Jeanne Casale, 28, of Philadelphia, who broke character just long enough to speak with a reporter. "You can be a kid again.''
The zombies were dressed in tattered T-shirts and tuxedos, prom dresses and wedding gowns, scrubs, business suits and coveralls.
"I used the ugliest dress I could find,'' said 24-year-old Lisa Gosselin of Brick.
The zombies were covered in blood.
Two housewives-turned-zombies carried trays of gray-matter cookies. One, ironically, carried a "Call police'' sign.
Others carried signs that read "Zombie rights'' and "Zombies are were people, too.''
No zombie invasion is complete without zombie hunters, like 9-year-old Daniel McMahon of Hillside. He stood off to the side of Ocean Avenue, toy gun in hand. He fired round after round into the stream of zombies.
The much older crowd all-to-willingly played his game. They walked up, pretended to take the gunshots and fell to the ground.
"I'd rather shoot zombies,'' McMahon said. "Because I don't want to be mindless.''

I'm still working on my own post with lots of zombie pictures but I thought in the interim, I'd repost the article from Sunday's Asbury Park Press and the picture of Amanda and Dani that graced the article. What a way to have your 15-minutes of fame,eh? If you'd like to take a gander at a few more of the undead that appeared in the Asbury Park Press, click here and enjoy!
Posted by Linda at 10/05/2009