Amanda and I took a drive over to Providence, Rhode Island yesterday in search of two things - the grave of science-fiction author H.P. Lovecraft and holiday hotcakes at iHop!  She wanted one and I had been jonesin' for the other since being unmercifully teased by commercials for a restaurant that's not even close to home! A quick search of the internet showed Lovecraft's final resting place to be within the grounds of the Swan Point Cemetery which is located in northeastern Providence and borders the Seekonk River.  Established in 1846 on 60 acres of land, Swan Point now covers 200 acres and is also home to the remains of 23 Rhode Island Governors, 10 Civil War Generals (including General Ambrose Burnside who made quite the name for himself at the Battle of Antietam - and not in a good way), as well as what looks to be an entire platoon of other Civil War Veterans.

With over eleven miles of roadway intertwining their way around the scenic grounds, it obviously wasn't going to be an easy task to find one grave - especially considering that the office was closed and we only had an hour before it was a) dark and b) the cemetery locked up for the night.  What to do?  What to do?  A quick phone call to Kevin, one of my dispatch partners, gave us the needed directions and off we went in search of Providence's own Howard Phillips Lovecraft - an American author of horror, fantasy, and science fiction.

H.P. Lovecraft was born in Providence on August 20th, 1890 and, though he moved around some during his lifetime, died there on March 15th, 1937 and was buried along with his parents in the Phillips family plot (his mother, Sarah Susan Phillips Lovecraft, could trace her ancestry in America back to the Massachusetts Bay Colony in 1630).  The family stone is that tall one there ... In 1977, a group of individuals raised the money to buy Lovecraft a headstone of his own and placed it behind the bigger Phillips family stone.  On this small stone they inscribed Lovecraft's name, the dates of his birth and death, and the phrase, "I AM PROVIDENCE," - a line from one of his personal letters. It's on that small stone that fans of the man Stephen King called "the twentieth century's greatest practitioner of the classic horror tale" leave small tokens of their visit - coins, small stones, a blue plastic dolphin, and ... a car key?? - a cemetery security officer in a white SUV drove up and advised me that there was no photography allowed in the cemetery.  At first I thought he was kidding but he told me that it was posted on the sign by the front gate (that I hadn't bothered to read as we really had no time to waste when we first got there). Well, gee, no photography isn't listed on the website and whoever heard of not being able to take pictures in a cemetery?  Needless to say, though, rules are rules and I apologized profusely to the security officer who then asked me what kind of camera I had as he has a Nikon D80 and he thought mine looked newer than his.  Thankfully he didn't ask to take the camera and delete the pictures but as Amanda and I took our leave I couldn't help but take one more picture of the main office building! I know - shame on me!  Such a rule breaker and rebel I am!

Following my violation of the rules, both of us were pretty darned hungry so it was time to locate the local iHop and tuck into some of those mouth-watering pancakes that I kept seeing on TV but the closest one coming up on the GPS was 40 miles away.  Huh?  I knew that there was one close by as I had the address printed out and sitting at home on the kitchen counter (of course!) so once again I gave Kevin a call, disturbed his third watching of the new Star Trek movie, and begged him for the address.  Thanks again, Kev! Four and a half miles later and we pulled into the parking lot and entered pancake heaven!  Amanda didn't want pancakes but "real food" and I assured her that wouldn't be a problem as iHop makes a lot more than just pancakes.  She obviously hasn't been drooling over the commercials for the holiday hotcakes like I have otherwise she would have been ordering the same thing! While Amanda ordered chicken-fried steak with mashed potatoes, broccoli, and Texas toast (which if I'm being honest sounded really, really good too!) I opted for the Eggnog Pancakes along with eggs, bacon, sausage, and hash browns. It's a darned good thing the only thing I'd had to eat all day was a small cup of oatmeal around 11:00 a.m. because I was definitely going to need the room for all of that - not to mention maybe walk back to Connecticut to work off all those calories! Still, it was the holiday season ... almost ... and a bit of a treat was in order, right?

When our food arrived it all looked totally delicious and well worth the 40+ mile drive to get it.  Even though Amanda seemed perfectly happy with her meal, she couldn't help but reach over and try to steal ... ... my Eggnog pancakes which looked (and tasted) really, really good!

Next time we take a road trip to find an iHop (hopefully next month with our friends Jason & Amy) I'm going to try the Pecan Pancakes but at least for now I can watch those darned commercials and be able to say that "Yes! They taste as good as they look!" rather than wondering if they do.

All in all it was a nice little road trip on a late Saturday afternoon/evening except for one small snag on the way back home.  There was a pretty good accident on the Interstate and they had to close down the southbound lanes of Route 395 so that the Lifestar helicopter could land to transport one of the victims. 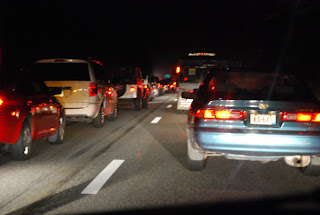 Guess who I called for information about the accident while we were waiting? Yep!  Thanks again, Kevin! I owe you and I sure hope you got a chance to finally fnish your movie!
Posted by Linda at 11/22/2009