For those of you wondering how the pie-a-thon went yesterday, I managed to not only bake four pies but also a batch of brownies for Amanda being that the pies are off limits!  I baked one pumpkin pie, two traditional apple pies with crumb crusts (I can't make a top crust for love or money I'm afraid!) and, using a recipe that Lois sent me, I made my very first cranberry-apple pie.  Here be the finished products  -

As I was baking all of those pies yesterday, I couldn't help but think about the main thing my mother used to always bake at this time of the year and that was an angel food cake with mocha frosting - my Dad's very favorite cake for his birthday which would have been today.  Were Dad still with us he would have been turning 75 today. 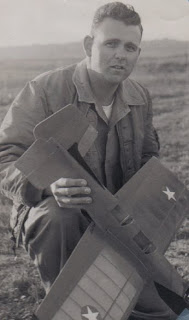 I know I've posted these pictures in the past but - honestly - they're two of my very favorite pictures of my father taken when he was stationed overseas and I was really, really young (if I was even around at all!).  My father joined the Air Force when he was only 17 years old and made a career out of it retiring in 1972 at the not-exactly-ripe-old-age of 37 with a pretty distinguished record to boot.

Dad fought in both the Korean War and the Vietnam War and he received both the Purple Heart and the Bronze Star Medal while he was stationed at DaNang Air Force Base where he was an aircraft mechanic on F-4 Phantom fighter planes. The F-4's were a long-range supersonic jet interceptor fighter/fighter-bomber that served as the principal air superiority fighter for both the Navy and Air Force in Vietnam and my Dad could fix them like most guys can fix lawn mowers. 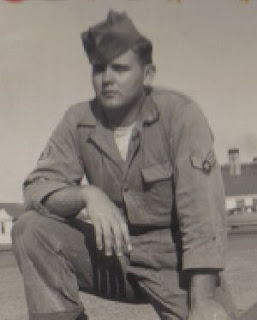 Dad was really, really good at what he did and was even asked once to fly with the Thunderbirds, the Air Force's air demonstration squadron,  as one of their mechanics but he turned the offer down saying that he didn't want to live out of a suitcase or leave my mother alone with us four kids while he flew all over the countryside and the world to Air Shows and the like for three or four years.  I'm pretty sure, though, that he was honored to be asked and it was pretty good bragging rights to have your Dad asked to fly with the Thunderbirds - especially amongst other "Air Force Brats"!

Even though it was ultimately the exposure to Agent Orange in Vietnam that gave my father the cancer that caused his death almost 7 years ago, I honestly don't think that he would have done anything different with his career choice.  It was a career that gave him the chance to see a bit of the world and also to provide for his family even though he sometimes had to leave that family behind while he was deployed overseas.

When Dad was stationed overseas, he obviously missed out on those birthday cakes my Mom would bake for him but whenever he returned that was always one of the first things he'd get - along with a big bowl of rice pudding and meatloaf (he thought my Mom's meatloaf was pretty much better than anything else in the whole world).

Anyhow, I hope there's angel food cake with mocha frosting where my Dad's stationed now and I also hope that he knows that even though he's gone, he hasn't been forgotten.  Happy Birthday, Dad; we miss you.
Posted by Linda at 11/25/2009