Saturday was pretty much a wash-out here in New England so I spent the day in my pajamas lounging around the house watching bad movies, historical documentaries, and John Barrowman (rowr!) in Torchwood on BBC America. Torchwood is a spin-off of Amanda's favorite Doctor Who and Captain Jack, Barrowman's character, is quite easy on the eyes - much like David Tennant's Tenth Doctor!  How bad can it be to spend a day with handsome British gentlemen on the TV?   Not bad at all! 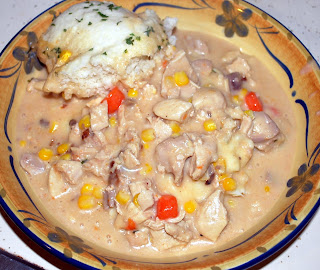 In addition to watching more TV in one day than I normally do in an entire week, I also attempted something new in the kitchen and cooked up a batch of chicken & dumplings as it seemed like the perfect meal for a chilly, rainy November day.  A friend from work had mentioned chicken & dumplings on her Facebook status a few weeks ago and I had been wanting to try making it ever since.  I more or less wingd it sans recipe and I'm happy to say it turned out quite well along with the mashed potatoes that are invisible in this picture.  Amanda declared it to be very good even though she wasn't too keen on the corn.  I know that most people use peas along with the carrots but she hates peas even worse than corn so I sort of compromised and went with corn though I guess I could have used green beans as she tolerates those the best.

Quite unfortunately it doesn't appear like we are going to be able to get Rufus to come into the house and make himself at home.  As I mentioned the other day, we were trying to take in one of the neighborhood strays who is a very handsome cat and quite friendly but every time he comes in the house, he simply sits at the back door and howls to go back out.  It's a shame as I really like Rufus, which coming from me as a non-cat person is quite the compliment.  Amanda would still like to have a cat, though, so we are keeping our eyes open for other possibilities pending approval from my landlady to have one.  I'm pretty sure she wouldn't mind but I do believe a deposit may be required. 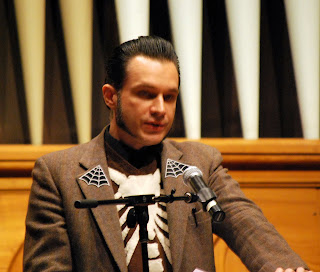 Remember our trip down to Baltimore for Edgar Allan Poe's funeral back in October? Well, Amanda's favorite illustrator who was one of the speakers at the funeral put up a video on YouTube yesterday and much to her delight it contains a picture of her and Darci at the previous day's book-singing.  The video also highlights the best parts of Gris Grimly's eulogy and Amanda totally loved hearing it again.  I was rather flattered that several of my pictures from the day were used in the making of the video which you can watch by clicking here if you'd like.  I believe it gives me a few extra 'cool points' amongst Amanda and her cronies.

A blogging friend (hi Gracie!) sent me an email yesterday asking me about doing a calendar with some of my photos on Red Bubble saying that if I did, she'd dearly love one.  Hmm ... truth be told, I haven't done anything with my account on Red Bubble in a long time but perhaps I will put together a calendar just to see what it looks like.  The tricky part would be picking just the right picture for each month but it could be kind of fun, too.  Gracie, I will let you know!   Any suggestions for photo choices?

Finally, a big thank you to my mom who decided to give me my Christmas present quite early this year in the form of a Comfort Furnace infrared heater.  My mom knew that I was majorly concerned about what the cost of electric heat was going to be like this year so she did some research and bought me a unit that claims it will heat 1,000 square feet.  I don't know if that's accurate or not but we set it up in the living room last night and it did a great job there as well as into the dining room and the kitchen.  Havng a brick house it's been pretty chilly in here lately but for the past two days it's been quite comfy cozy without the added stress of the electric bill.  My mom is truly the best and in this case, I don't mind Christmas coming early at all!