With a beautiful November day to enjoy yesterday (on my day off no less!) I thought I'd take some time to see if I could get some photographs of a train or two but alas, I may as well have stayed home and cleaned the dining room which desperately needs it! 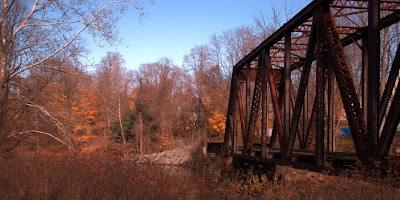 I've been trying to catch a train crossing over the railroad trestle pictured above but have had absolutely no luck so far. The trestle crosses the Yantic River in between the Upper and Lower Falls not too far from my house and even though it's quite photogenic in its own right, I keep thinking how great the trestle would look with an actual train going over it. Unfortunately though the New England Central Railway, which operates on those tracks, apparently has pretty erratic schedules so there's no telling when a train might go by.  After waiting there for well over an hour yesterday the only thing I was catching was cold so I finally decided to head south and see what I could find closer to the Groton/Mystic area.

After driving around some I found a railroad crossing in the Noank section of Groton that looked like it had some potential so I took up a position near the tracks and waited for a train or two to come by.  Amtrak is the primary operator on the tracks at that crossing and several Acelas blew by while I was there.  Obviously I was not having a good camera day as the best shot I got out of all of the ones I took was this one - 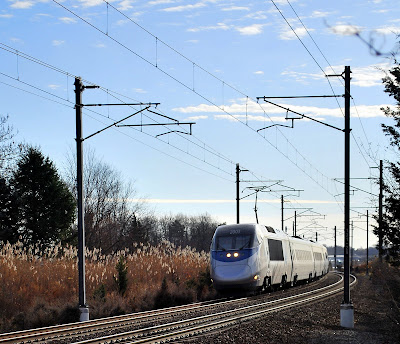 and even that one isn't all that great. Granted, the train was zooming past me at a pretty good rate of speed so getting a good picture was tricky but I'm sure a better photographer would have gotten a nice picture. At least I got a wave from the engineer and a cheery blast from the horn as they sped by so I guess the day wasn't a total loss.  I'm thinking of trying my luck at the trestle again today but we'll see as there really are other things I could be doing before going into work other than hanging out by the railroad tracks!

Speaking of things to do, I have a couple of suggestions for you today!  First off, you could pop over to Everything and Nothing and wish Akelamalu a very happy birthday as she's celebrating hers today over in jolly old England.  Akelamalu is a bloody brilliant writer who always likes to add an unexpected twist to her stories and she also goes on some of the most amazing journies through England that has me wanting to go over there even more than I did before - as if that were possible!

After you stop in and wish Akelamalu a happy birthday click on over to PEA's Corner and enter her Christmas Giveway 2009 by simply leaving her a comment saying "Hey!  Count me in!" - or something along those lines!   PEA, a real sweetheart from Canada, has put together a wonderful collection of snowmen including a soap/lotion dispenser, toothpick holder, candle, and other assorted snowman goodies that are sure to put a smile on your face and holiday happiness in your home.  "The more - the merrier!" for the contest PEA says and you don't even have to tell her that I sent you if you don't want to!

When you're done with those two things you're free to have a wonderful Wednesday!
Posted by Linda at 11/18/2009