Whew!  I can finally sit down for a few minutes after being on my feet all morning finishing up the cookie baking that I started around 8:00 last night.  Nothing like waiting until the last minute to finally get in the Christmas cookie mood for which I totally blame Lisa!  She'd been writing about all of the baking she'd been doing on Facebook and her blog and I guess it must have inspired me as I decided yesterday afternoon that I was going to make cookies when I got home from my short shift last night - and thank goodness it was short as I seemed to be suffeirng from a major case of Dispatcher Dyslexia!  I couldn't seem to say anything right on the radio! That's what I get for working on my day off after spending the whole day wrapping gifts! 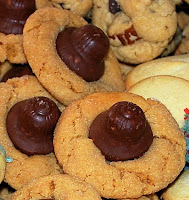 Anyhow, at 8:00 I started the first batch of cookies - a slight twist on Peanut Butter Blossoms as I thought I had Hershey Kisses but turns out I had Nestle's Crunch Christmas Bells instead.  Oops!  For those of you who refer to Peanut Butter Blossoms as "nipple cookies", these are even more 'nipplish' I'm afraid but Amanda says that they taste good so I guess that's all that matters!  From there I moved on to Oatmeal Scotchies minus the coconut that I had used in the ones I made on Saturday.  They're Andrew's favorites and I wanted to make him some more as an additional thank you for plowing my driveway the other day.  With my bad back, I can't say thank you enough! 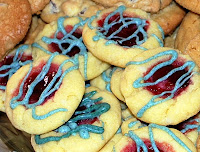 After that I made what were supposed to be Thumbprint Cookies with Raspberry Jam but Amanda said that I'd be lying if I didn't say that they were actually Index Finger Cookies as that's what I used to push the holes in the centers!  I drizzled them this morning with white chocolate that I had tried to tint a nice shade of Christmas green but the color ended up looking more like aged copper instead!  I just couldn't get the green right for nuthin'! So I guess you can call them Index Finger Cookies with Raspberry Jam & Verdis Drizzle!

Next up were drop sugar cookies with crushed peppermint and then a batch of chooclate chip cookies made with semi-sweet chocolate chips and white chocolate chips. At that point it was 1:00 a.m. so I finally called it a night and figured I'd finish up in the morning. 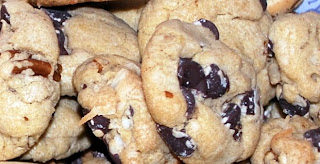 At 9:00 a.m. I was back at it with a batch of chocolate chip cookies with pecans and then another variation using pecans and coconut both.  I drizzled the sugar cookies with the verdis-colored white chocolate and then also dipped some mint chocolate Milano cookies and sprinkled them with crushed peppermint and then drizzled some milk chocolate Milanos.  I was going to dip some dark chocolate ones but when I went to get them out of the cupboard, they seemed to have disappeared!  Hmmm ... did Santa come early for cookies and milk??

Finally at 12:30 I was finished after I arranged the cookies on a platter to take into work with me today and bagged some up for Wayne and Kevin to have on Christmas Day as they're the ones who drew the short straw and will be working the holiday.  Plus, they won't be in either today or tomorrow when I plan on bringing cookies in and when I mentioned baking yesterday, Kevin's eyes lit up much akin to a child's on Christmas morning upon seeing that Santa arrived overnight!  How could I not set some aside for him??  I've also got a separate bag all made up for Andrew with a bit of every kind but mostly the Oatmeal Scotchies that he so loves. There were plenty left over for Amanda so she's not going to feel left out when I take the big platter above into work with me in about half an hour - plus she helped out with the taste-testing.  As I told her last night, one of these days I'm going to have to teach her how to bake and not just eat but all she did was laugh when I said that.  I guess that means I won't be getting any homemade goodies from her anytime soon!
Posted by Linda at 12/23/2009