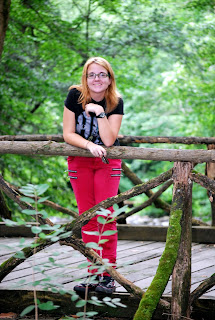 As many who are regular readers know, my youngest daughter lives with her father and step-mother in Florida. It's not a living arrangement that I like but to perfectly honest, Amanda and Jamie barely get along at best and fight like a couple of territorial cats at worst.  I have no idea why they can't get along but I do know that having the two of them together in the same house alone combined with my ridiculous work hours would probably result in my coming home to murder and mayhem one of these days. I kid you not, it's sad but true.

So ... Jamie lives in Florida and usually comes home to Connecticut for most of the summer and Christmas ... usually.  This Christmas is not going to be one of those "usuallys" and even though I like to think that I'm okay with it I seem to keep finding myself caught up in moments of extreme sadness about the whole situation.  The other day I got a Christmas card from my aunt with an invitation for our annual Christmas night family get-together at her house which was addressed to Amanda and I and read "I hope the two of you can make it".  The two of you ... not the three of you as is normally the case but the two of us.  This immediately brought tears to my eyes as has putting Jamie's ornaments on the tree, looking at her Christmas stocking, and knowing that I won't be having to make a trip to the airport anytime soon.

Instead of coming home to be with her sister and I this Christmas, Jamie will be making preparations to attend the Florida Youth ChalleNGe Academy as a cadet for the next 5-1/2 months as part of her voluntary enrollment in a 17-1/2 month program that is geared towards "providing values, skills, education and self discipline to young people while incorporating the structure and espirit de corps found in the military model. The residential phase of the program (5-1/2 months) takes place in a highly disciplined and motivational environment promoting structure and academics along with leadership, health, community service, life skills, job skills, physical fitness and citizenship."  In other words, I guess she's heading off to Boot Camp of a sort in order to get her life onto some sort of track that she wants to be on.  Following the residential phase, she has a 12-month mentorship phase beginning immediately after graduation in her home community.

The girls' father and I don't talk all that often but most of the news I get from him out of Florida in regards to Jamie is oftentimes rather disconcerting and disturbing as Jamie - who has always been impulsive and impetuous - always seems to manage to get herself into some sort of trouble or other when she isn't supervised.  A lot of her problem is boys and getting tangled up with the wrong ones - which are the ones that she is attracted to - and the school that she's been attending seems to give her just enough rope to hang herself.  As much as I'd like to have her up here with me, she'd be unsupervised a lot here, too, and I'm afraid that the trouble that always seems to follow her would be as much of a problem - if not more when you add on the tension between Jamie and her sister.

Jamie tries hard to "toe the line" but temptations are what they are and so when her father found the Florida Youth ChalleNGe Academy, she agreed that it sounded like a good way to get her life on track and find some direction and meaning.  The program is run by the National Guard as directed by the Joint Armed Services Committee and is funded by the Department of Defense and the State of Florida.  Because Jamie meets the qualifications for this program, it's not going to cost hardly anything for her to attend except for a small amount up front and whatever basic supplies and clothing she needs to start out.

Jamie and I have spoken about her attending the Academy and she's actually looking forward to it as well as to her life once she graduates.  We've been discussing the possibility of her enlisting in the US Air Force and following the tradition that my father began and which I followed (though I wasn't smart enough to make a career of it!).  We've spoken about the opportunities that are available to her through enlistment which include career training, the chance to further her education, and also the ability to visit places that she might not see otherwise.  I know that the military isn't for everyone but considering Jamie's personality and her ability to get herself into trouble without structure, it would probably be the ideal place for her.  Add on the fact that Basic Training would be a walk in the park after the 5-1/2 month program she's going to go through and it seems like an ideal situation.

I've got my fingers crossed that Jamie finds what she's looking for in life while she attends the Academy and that she learns the discipline that will keep her out of the trouble that she seems to want to find.  She's a good kid but she's always been my "wild child" and I sure don't want to see her dropping out of school or hooking up with the wrong guy and finding herself in the kind of trouble that could totally mess up her whole life.  I think that this Academy is a good opportunity for her so even though I am going to miss her like nobody's business this Christmas, I'm hoping that it's for a very good reason and that this will be the break she needs in life to become the success that I know she can be.
Posted by Linda at 12/18/2009

Email ThisBlogThis!Share to TwitterShare to FacebookShare to Pinterest
Labels: Jamie