I Can Haz Cheeseburger - and Fries!

The topic of really good cheeseburgers came up at work last Thursday afternoon and after I had mentioned that I really enjoyed the Old Timer Burger at Chili's, my dispatch partner Jeff said that as far as he was concerned Five Guys made THE best ever cheeseburgers; that opinion was quickly seconded by our scheduler, Chica.

Now the only thing I knew about Five Guys was that Amanda had raved about the place when she used to go down to New Jersey to visit her friend Darci but I'd never actually been to one myself. As a matter of fact, I was under the mistaken impression that the closest one to us was way up in Enfield - which is north of Hartford - as I'd seen the sign the couple of times we'd driven up to see Sami. Jeff immediately set me straight on that one and said that there was one down in Mystic in the same plaza as Starbucks - a relatively easy drive and definitely within striking distance of Norwich. 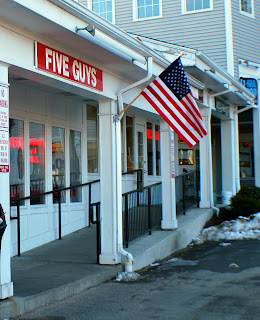 With the sun shining this past Saturday (something it is most definitely NOT doing today), Amanda and I set out for Mystic in search of Five Guys and their legendary cheeseburgers around 2:00 p.m.  The small shop was very easy to find as I knew where the Starbucks was but it is most definitely unassuming; chances are if you didn't know it was there, you'd never even think to look there as it just blends in with the rest of the shops.

Even though it was after lunchtime, there was still a pretty good crowd inside the restaurant that reminded me a bit of California's famous In n' Out Burger with its red and white-checked color scheme though the peanut shells all over the floor weren't something one would ever see at an In n' Out! 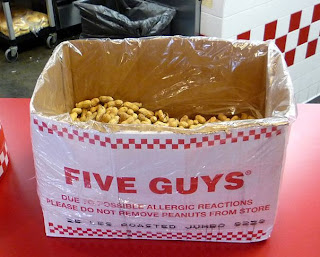 Apparently one of the attractions of Five Guys is the big boxes of peanuts they put out for their customers to help themselves to while waiting for their order to be ready and the floor is the accepted place for the shells.  Okay ... I was just going to have to remember to walk carefully as I could just see myself slipping on peanut shells and landing on my butt in the middle of the dining area!

The menu is pretty simplistic which in my opinion is the hallmark of a good burger joint and Amanda wasted no time in ordering a bacon cheeseburger with lettuce and pickles while I ordered a basic cheeseburger with lettuce, tomato, pickles, and mayo; two small fries and one root beer completed our order.  Before we barely had a chance to crack open a few peanuts (stupid me didn't want to throw the shells on the floor so put them in a neat pile on the table!) our number was called and I brought a brown paper sack back to our table that felt awfully darned heavy for just two burgers and two orders of fries. I soon found out why and wish I had know this before ... 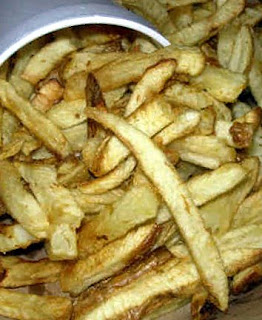 The fries at Five Guys are apparently rather famous not just for their flavor but for their quantity.  Sure, they put some of your fries in a small cup but your order of fries doesn't stop there - they overflow the cup and take up a good portion of the paper sack, too!  Our two small orders of fries could have fed a family of six with fries left over for another meal!  Were there such a place as French Fry Heaven, surely we had entered it!

I had to laugh today as I sat down to write this post as one of the news articles that popped up on Yahoo! actually mentioned that Five Guys french fries had once again made the Men's Health list of America's Worst French Fries.  According to the article, Five Guys fries rate as the "Worst Regular Order of Fries" with the following stats:


"Unfortunately, Five Guys doesn’t offer anything but fries in the side department. Your safest bet, of course, is to skip the fries altogether (you’d be better off adding a second patty to your burger), but if you can’t bring yourself to eat a burger sans fries, then split a regular order. That will still add 310 calories to your meal, but it beats surrendering more than 75% of your day’s calories to a greasy paper bag."

Well, heck - it would have been nice to know that before Saturday! Even without benefit of this article, though, I made a mental note to only ask for one regular order the next time we were there as Amanda and I brought home what seemed like half a bag of fries which she later ate for dinner.  Oh, and according to the sign displayed in the restaurant, our fries that day came from Shelley, Idaho potatoes.  It's always good to know whose potatoes you're eating! 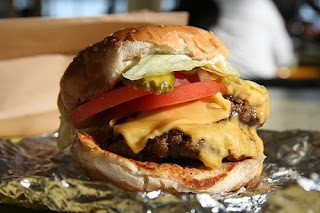 But enough about the fries and how bad they are for you (though they taste really, really good!) - what about that cheeseburger?  Ah yes, that cheeseburger!   I really was not expecting a double-patty monstrosity that barely fit on the bun but that is exactly what greeted me when I unwrapped the foil it came in and let me tell you ... it was GOOD!  Granted, I had to put it down and make ample use of several napkins between just about every bite but when it comes to cheeseburgers, that's not a bad thing!

I'd have to say that my Five Guys cheeseburger was very possibly the very best cheeseburger that I have had in a long time - bar none!  It was juicy, it was flavorful, it was sliding off the bun ...   It was well worth the drive down to Mystic!  Granted, I wouldn't want to make a regular habit of Five Guys burgers as I've got a pretty good idea that they aren't good for one's arteries at all but if you're going to treat yourself then this is a good way to do it.  Just remember to ask for one regular order of fries to split with your entire family!