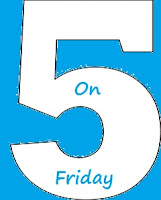 For this week's version of Travis' Five on Friday meme, in keeping with my sort-of-theme of movie music composers I thought I'd go with yet another of Amanda's favorites - Daniel Robert "Danny" Elfman.  In addition to composing music for television and movies, Elfman is best known for leading the rock band Oingo Boingo as a singer/songwriter from 1976 until its breakup in 1995.
Beginning with PeeWee's Big Adventure in 1985, Elfman has been scoring movies ever since and has been nominated for four Academy Awards as well as won a Grammy Award for Tim Burton's Batman.  He additionally won an Emmy Award for his Desperate Housewives theme and is well-known for creating The Simpsons main title theme.  Among Tim Burton fans, Elfman is famous for his role as Jack Skellington's singing voice in The Nightmare Before Christmas - one of Amanda's favorite movies (as a matter of fact, she insisted I add a sixth song to this week's post as it just didn't seem right to her that I not have one of his songs as Jack Skellington; consequently you'll find a You Tube video below the player with a song clip.)

If you're familiar with Danny Elfman's work and wondering why it seems that he scores almost all of Tim Burton's movies, that would be because they're good friends and he has, in fact, scored all but Ed Wood and Sweeney Todd - and that includes the recently released Alice in Wonderland.  It seems like some movie directors and music producers just go together and that's definitely the case here! Burton has said of his relationship with Elfman, "We don't even have to talk about the music. We don't even have to intellectualize – which is good for both of us, we're both similar that way. We're very lucky to connect." (Breskin, 1997)

If you want to connect with some more great music, don't forget to pop by Trav's Thoughts and check out the other Five on Friday memers (is that a word?) to see/hear what they've got to offer!
Posted by Linda at 3/26/2010