Just to Keep You Up-to-Date on the Cemetery Theft Case ...

This is the latest report that was in the Norwich Bulletin regarding Sean McNee, the lowlife scum who stole the statue from the grave of Sarah Larned in the Yantic Cemetery:

Sean McNee was ordered held Tuesday on a $150,000 bond on charges he stole, cut up and sold pieces of a 450-pound bronze statue marking a historic plot in Yantic Cemetery.

Norwich Judge Robert E. Young said the bond was justified considering the serious nature of the allegations and McNee’s “lifetime of crime,” that includes an extensive criminal history in Connecticut and beyond.

Bail Commissioner Lois Dupointe said McNee, 43, of Willimantic, has 17 prior criminal convictions in Connecticut that include 14 prior larceny convictions. He also has an outstanding larceny warrant in Florida.

The statue of a kneeling woman marked the 120-year-old burial plot of Sarah Larned Osgood and part of a larger Osgood memorial at the cemetery on Lafayette Street. It was reported missing Feb. 19.

Pieces of the statue turned up last month at Willimantic Wastepaper scrap yard in Willimantic, where suspicious workers put the pieces aside in case they turned up as stolen. McNee cashed in the pieces of the estimated $35,000 statue for about $200, the owner said. The head is still missing.

After being picked out of a lineup as the man who sold the statue’s pieces, McNee told Norwich investigators he had never been to the Yantic Cemetery. He said he found the pieces of the statue under the bridge at Norwich Harbor — close to where he was injecting heroin, according to a police arrest warrant affidavit.

Police were skeptical of the story considering the weight of the statue and the fact the area is surrounded by a retaining wall and 12-foot high fence.

“McNee has the knowledge to remove the statue with minimal effort and damage,” Halen told police.

As part of their investigation, police said they seized a grinder and spare cutting wheel from a home in Lebanon. Workers at Willimantic Wastepaper said McNee was with two other people, a man and woman, when he cashed in the bronze. Police said more arrests are expected.

Historians are looking into the possibility the statue could be repaired.

Tom Chase, an art conservator who specializes in bronze and who owns Chase Art Services in Woodstock, said if all the pieces are found, it would be possible to repair with some welding.

“If there are copies, they may be able to recast the head. There are ways to go,” Chase said.
McNee’s case was continued to March 29 and he remains held under a medical watch. He is charged with first-degree larceny, first-degree criminal mischief and desecration of a grave site.

It's no surprise to me that McNee is a lying dirtbag but it sounds like the police have a pretty strong case against him and I don't think he's going to be able to worm his way out of this one.  In an earlier story, the Bulletin reported that,


"Chunks of the 450-pound crouching woman, with an estimated value of $35,000, showed up at Willimantic Waste Paper sometime last month, where owner Tom Devivo said his brother was immediately suspicious.

“They said it was pieces from a Statue of Liberty (replica) that tipped over,” Devivo said. “It’s not something we typically get here. It’s really a shame. We feel bad for the family.”

I am very thankful that the owners of the scrap yard put the pieces of the statue aside feeling that something was definitely not right and that they were able to help the police in making an arrest in this case which has bothered me to no end.

It seems to me that based on his past criminal history and the heinous nature of this crime, that the court should throw whatever the maximum penalty is at this guy when he next appears in court on the 29th.  Not having to be at work until 3:00 that day, I'm thinking I just may be there to see what the judge has to say next while keeping my fingers crossed that something is finally done about a guy who has committed way too many crimes already. 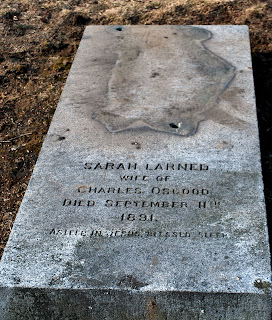 While I was out taking other pictures today, I stopped by the Yantic Cemetery and visited Sarah's grave where it was even more dismaying to see in person the spot where her statute used to kneel over her grave.  The ground around the grave was pretty beat up so obviously it was no easy to feat to remove the 450-pound bronze lady from her pedestal.  It made me wish that Norwich PD had some of the technology of CSI: Miami as Horatio would have solved this crime already based on the evidence at the scene of the crime but I'm hoping that even without that, there's enough evidence to toss this guy in the can for a good long time.  A good long time!
Posted by Linda at 3/10/2010