I guess it's no secret that we here in New England have been experiencing some epic flooding the past few days as a very slow storm system has spun overhead and dumped an awful lot of rain on our heads - rain that has nowhere to go in ground that is already as over-saturated as a sponge that can hold no more. Roads have been closed, schools have been closed, businesses have been closed, fire departments have been worn ragged pumping basements out, sandbags have been filled, the National Guard has been called in ... well, let's just say it's been an interesting couple of days. However, today the rains stopped and the sun tried to come out a little bit ... 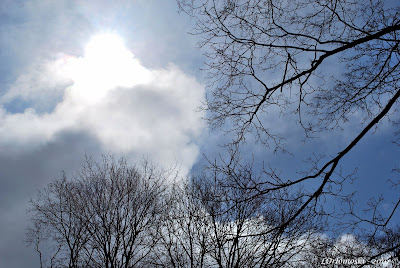 ... so I decided to put my boots on and take the Nikon out for a look-see at the Yantic River in the area closest to my home.

Just down the road a ways from where I live are the Falls Mills Condos - an apartment complex at the site of a former mill along the Yantic River. The complex is down river from Indian Leap, a place that I've written many times about here in the blog and which regular readers are more than familiar with. The picture below was taken from a spot behind the condos very close to the river and as you can see, the water was a bit high - to say the least! 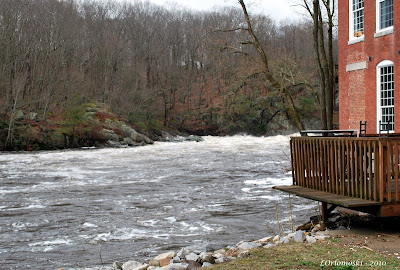 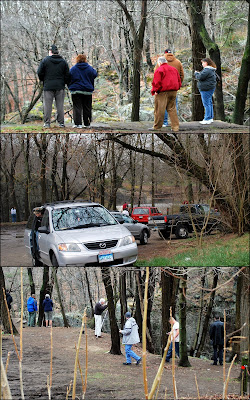 These crowds were nothing compared to the hordes of people who were standing around down by the falls yesterday when I took a quick drive by and decided that the smart thing to do was to keep driving. Of course, there's a reason that all of the people were there as the water rushing over the falls was quite the sight to behold - 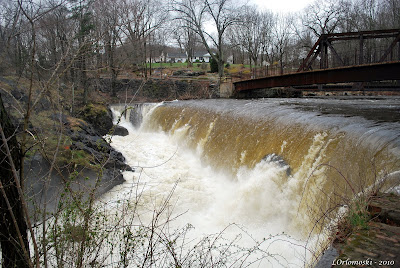 There was so much water running over the falls that you couldn't see the treacherous rocks that sit at the bottom of the falls but if you were smart, you'd know that getting too close wasn't a good idea as rushing water equals erosion which equals the possibility of land giving away below your feet. Some people, however, are apparently not smart ... 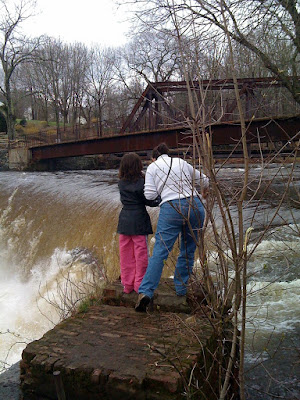 In addition to being incredibly stupid about taking her daughter to go stand close to the edge of the falls here, this brilliant mother later decided that it would be a good idea to take her daughter closer to the water over the bank that was very steep and slippery where they both could have slid to their deaths in the rushing water below - 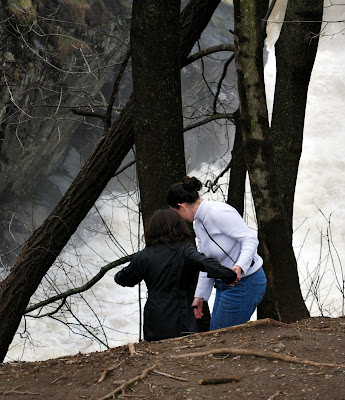 And trust me, it would have definitely been their deaths down below as there is no way that anyone could survive a fall into the Yantic with the water churning like it is - 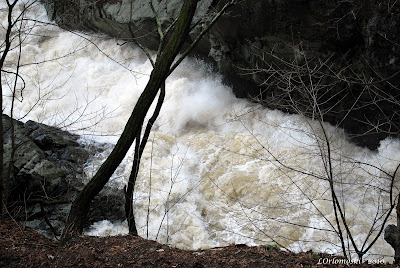 People have been known to die at Yantic Falls when the water is nowhere near like it was today but apparently that fool woman didn't seem to understand the concept of "accidents happen" - especially on rain-soaked land that could move beneath your feet at any moment. Not wanting to witness any more stupidity in motion, I decided to walk back up by my favorite railroad trestle and take some pictures there and of the Upper Falls. 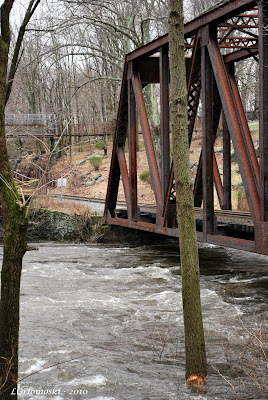 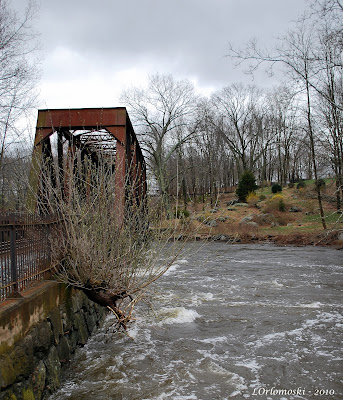 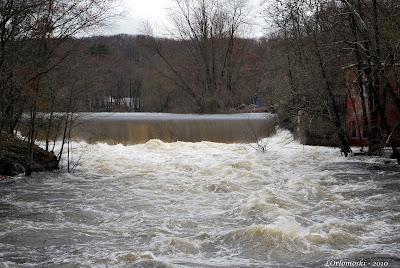 The Upper Falls of the Yantic River 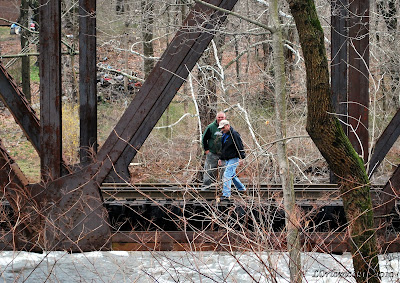 And oh look! Now there were stupid people walking on the railroad trestle, too! Sheesh! What on earth ever happened to common sense? Did it not occur to those guys that perhaps those train tracks they were walking on are part of an active line and if a train approached, they weren't going to have a lot of time to get off of the trestle?

At that point I'd had enough of watching people being idiots so I took one more shot of the water rushing over the lower falls from my nice safe vantage point on the sidewalk before heading home. 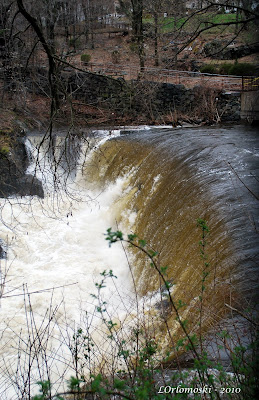 I also managed to get a couple short videos using my iPhone just to give you an idea of what it was like listening to all of that water rushing over the falls on its way to the Thames River and eventually the Long Island Sound.


Once we get past today we're supposed to be in for some good weather with sunny skies and warm temperatures so hopefully we'll be able to dry out a bit and the waters will recede some. Hopefully the forecasters are right and April will come in like a lamb as March is most definitely going out like a lion - a big, wet roaring lion at that!
Posted by Linda at 3/31/2010