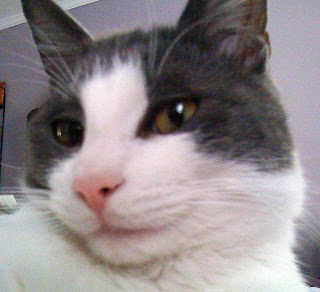 Hey, internet peeps, Tesla here ... the lady who writes this blog says I can't have my own blog as she barely has time to keep up with this one as well as visit all the others she has in whatever that thing called a Google Reader is blah, blah, blah but I think I've talked her into letting me do a post once in awhile.  We came to that understanding this morning when I had decided she'd been in bed more than long enough and it was time for me to go in and wake her up.  Nothing like a nose in the face to start the day I always say!

Anyhow, it's her day off so I sent her off to the store to go get some decent people-food so that I can stop listening to the kid that lives here whine about the fact that there's nothing to eat in the house.  Oh wahh!  There's plenty of kibble and the occasional can of Fancy Feast so I don't know what she's carping about all the time - not that I plan on sharing with her, mind you, as I never see her offering me even a smidgen of whatever she's eating but listening to her constant complaints is enough to drive a cat crazy!

Of course, I also figure that when the lady gets back from the store she'll have a new toy for me as she always seems to bring one home in the hopes that I'll play with it rather than all the other neat stuff around the house I've been finding to get into.  The kid hasn't learned how to put her stuff away yet and boy howdy, she's got some fun things to bat around the floor!

Until the lady gets back, though, I guess I'll just settle into her bed and have myself a nice cat nap. 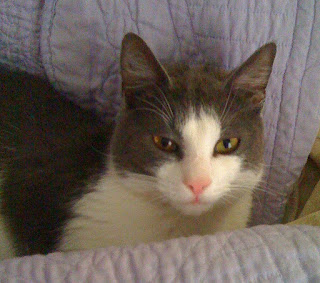 Oh, and don't worry, I'll tell her to go by and visit all of you when she gets home ... I think she's a couple days behind as that thing she calls "work" keeps getting in the way.  Of course, "work" is what makes all my new toys possible so I guess it's an okay thing. Now if you'll excuse me, I have new toys to dream of and some energy to renew so I can get into more trouble cute antics!  Later, peeps!

Update:  The lady came back from the store mumbling something about "it doesn't look like almost $170 worth of stuff, no wonder I have to work all the time!" but the good news is she bought a new toy - a bird-like thing that tweets when I swat at it and seems to smell of catnip.  I'm afraid I've been making a fool of myself with the thing ever since but what can I say?  I do love new toys!  And even better - the constant tweeting is driving the kid crazy!  Woot! 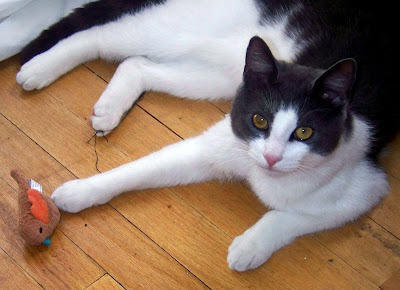 Email ThisBlogThis!Share to TwitterShare to FacebookShare to Pinterest
Labels: Tesla