Continuing my journey to the Green Mountain State, I arrived at my destination of Lyndonville close to 5:00 p.m. on Monday evening.  Lyndonville is a village in the town of Lyndon which is part of what's called "The Northeast Kingdom" of Vermont.  Lyndon refers to itself as the "Covered Bridge Capital of Vermont's Northeast Kingdom" because it has five covered bridges located within its six square miles so that seemed like a pretty good place to go if one was hunting covered bridges, as I was. My base of operations for my trip was The Wildflower Inn which is located on Darling Hill Road - a partially paved/partially dirt road that just happens to be dirt road in front of the inn.  The inn, formerly an old farm, is located on over 570 acres and opened in 1984 after being bought by the current innkeepers, Jim and Mary O'Reilly. The picture above was taken from the top of the sledding hill located behind the Carriage House which is the building that my room was located in.  The Carriage House was built in 1934 by local historical figure Earl Brown, the former governor of Minnesota.  Mr. Brown owned thousands of acres on Darling Hill Road in the 1930’s and 1940’s. The building has been converted to 10 "classic" rooms and three spacious suites.  My "classic" room was located at the very end of the building and the first night I was there, I was the only occupant of the entire building!  Talk about peace and quiet!

After checking in at the main farm house and receiving the key to my room, I went over to settle in until it was time to head back over to the farm house where the inn's restaurant, Juniper's, is located.  In addition to Juniper's, the farm house contains three sitting rooms, a playroom for the kids, a small gift shop area, and two two-room suites.  It's a lovely old Federal style house and very welcoming. 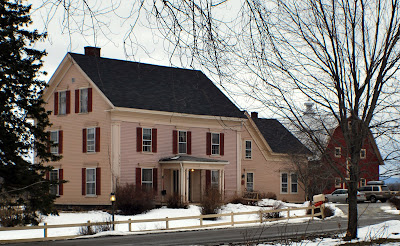 My room in the Carriage House was located across the road from the farm house, an easy walk as long as one was wearing boots! The room was very cozy with its queen size wrought iron bed, a comfy overstuffed chair, small kitchen area, and a bookshelf complete with "A Tale of Two Cities" - one of my most favorite books ever!  There was no TV and the internet - though free to guests - was virtually non-existent.  The idea at the Wildflower Inn is to get away from the fast-pace of everyday life and just relax so that's exactly what I did - at least until it was time to walk over to dinner! Truth be told, I don't really like going out to eat by myself as it makes me feel really, really alone. Granted, I wanted to be alone on this trip but it just seems like dining in a nice place surrounded by tables where families and couples are seated is a bit too much alone; however, I was pretty hungry having feasted only on Diet Cherry Coke and Cheddar Cheese Combos earlier in the day so I decided to suck it up and take myself to dinner.

To compensate for being there by myself, I decided that a treat was in order so I opted for a nice glass of Shiraz to go with my delicious cheeseburger and fries that I ended up choosing from a menu that contained a lot of really delicious sounding selections.  All in all, the meal was quite tasty and after a bit I didn't feel all that awkward sitting there all by myself.  Plus I ended up sleeping really, really well later that night!  I've got to admit that there seems like some definite advantages to a nice glass of wine and I've been kicking around the idea of buying some for here at home!

After going back to my room it didn't take me long to realize that it was going to be an early night as I was feeling pretty relaxed and sleepy.  I figured an early bedtime was a really good idea as I wanted to get an early start the next morning for my drive west and a few covered bridges in the Stowe area - just on the other side of the mountains in the picture below - and the peace and quiet of my room was definitely conducive to going to bed around 9:00, something I hadn't done in ages!