This past weekend has been filled with all sorts of art starting with the trip that Amanda and I made down to New York City yesterday so that she (and I) could stand in line at a small store on East 9th Street for much too long! 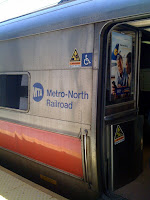 Originally I was scheduled to work on Saturday evening but when Amanda found out that one of her favorite artists was going to be doing a Sketch 4 Sketch Meet and Greet appearance in New York City I did the thing that any pushover parent would do and finagled a last-minute switch with one of my co-workers so that I could schlep her down there.

Hopping on the MetroNorth train out of South Norwalk, we arrived at Grand Central Terminal and then walked down to the MoMA to try to catch a little bit of the Tim Burton Exhibit that we had originally gone to on New Year's Day. 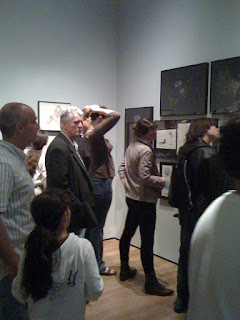 Our hope was that maybe it wouldn't be quite so crowded as before but alas, no such luck and it was wall-to-wall people - so much so that you couldn't see a thing and the room was so overheated I thought I was gonna pass out if I didn't get out of there and get some fresh air. Seriously, the next time the MoMA decides to do an exhibit like that one, they really ought to consider using a bigger gallery area! After leaving there after only a couple of moments, we quickly popped in to take a look at the Picassos on display in the studio next door and then took our leave of the MoMA to head to The Village.

Arriving just shortly after 4:00, Amanda joined what was already a decent-sized line to wait for her chance to meet San Francisco Bay Area artists Alex Pardee and Dave Correia.  The only thing I knew about Alex Pardee is that he has done album art for The Used and Aidan but Amanda has mentioned him numerous times as being one of her favorite artists; as for the other guy I was totally clueless and Amanda didn't seem to know much more than I did though to her credit, she had Googled the guy beforehand! 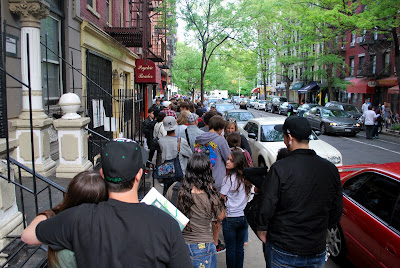 Leaving Amanda to stand with the other people who had brought sketches to trade with Alex and Dave, I walked down to the park at the end of the street and spent some time taking pictures before wandering back to see if Amanda had made any progress ... she hadn't moved hardly at all!

I left again to take a walk around the block and check out some of the little shops and restaurants in the area and came back to find that Amanda still hadn't gotten very far but she was bound and determined to stick it  out.  I walked across the street and sat on a planter around a tree for awhile and answered the questions of curious passersby who wanted to know what everyone was queuing up for. 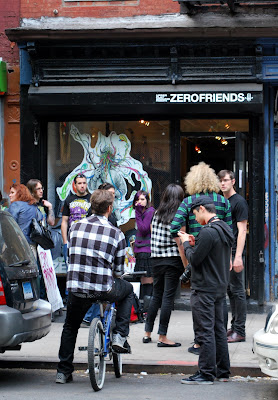 I also had the chance to talk with another Doctor Who fan about the pros and cons of the new doctor and the brilliance of David Tennant as I had borrowed Amanda's Doctor Who t-shirt to wear for the day.  The conversation killed a few minutes before I went back and waited in line with Amanda until I decided that sustenance was in order and walked down and grabbed a couple slices of pizza which I brought back and shared with Amanda as we went into hour number four of patiently waiting.

Finally at almost 9:30 p.m. Amanda got her turn to enter the store and hand over the sketch that she had brought with her to Alex & Dave - 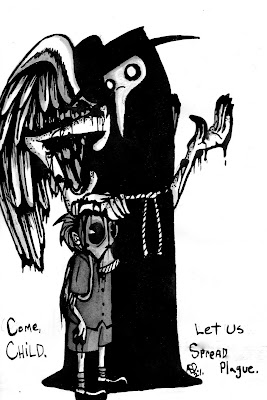 Those who have watched a lot of Doctor Who might 'get' some of this drawing but if you haven't, well ... let's just say it's definitely typical Amanda artwork! Inspired by her Plague Doctor, Alex drew the following for her: 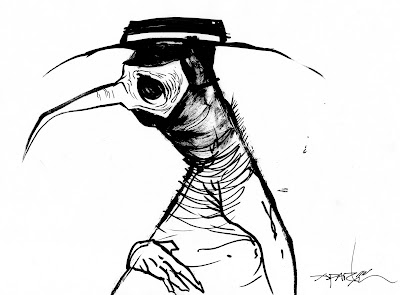 And Dave whipped out the following: 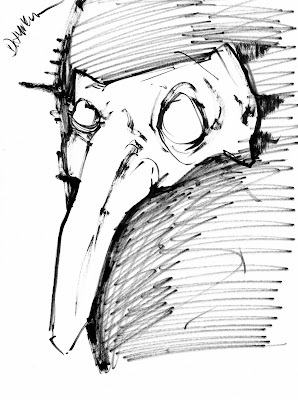 Admittedly those aren't something I'd want hanging on my walls but Amanda was thrilled with both pieces as well as the conversation she had with Alex wherein he complimented her on her choice of Gris Grimly t-shirt that she was wearing (come to think of it, everyone in the store loved her Gris Grimly shirt!) , asked if she was going to be going to art school (which she took as a good sign that her work was good enough for her to go), and then inquired as to how she had done the shading, etc. on her drawing which she also took as a good sign that they liked it.  All of a sudden the blister that had sprung up on her foot was forgotten as was how tired she was from standing in line for over five hours!

With a beaming 17-year old in tow, we flagged down a taxi as there was no way I was walking back down to the subway station and managed to make it back to Grand Central Station in time to catch the 10:22 p.m. train back to Connecticut.   Our long day ended when I pulled into our driveway at 12:58 a.m.  Oy!

Today it was back into the car to make the drive up to West Hartford so that we could attend the opening reception for the CT+5 regional exhibit that my photo of the Brooklyn Bridge had been accepted into.  The gallery was once again very small and very crowded so it was shades of the MoMA all over again minus any famous artwork on the walls!  Connecticut blogging friends Ralph and Patti made the drive up from Ansonia to join us which was really nice as Amanda really felt out of place amongst the older dowagers of West Hartford society who seemed to dominate the crowd and I was feeling a bit out of my league, too.  Honestly, after looking at some of the artwork on display, I am totally shocked that my humble little picture was chosen to be in the exhibit; to say that the room was stuffy in more ways than one (Amanda's words) was not incorrect!

From there we went to the local Red Robin for a nice lunch and chance to chat about kids and college (their oldest daughter will be graduating from the University of Hartford in May) and other things before Amanda and I returned to Norwich via the scenic route as I was apparently daydreaming and missed the turnoff for Route 2!

Finally, to cap off the art-filled weekend, I should mention that I received a letter in the mail yesterday letting me know that my submission to the Connecticut Academy of Fine Arts 99th Annual Juried Show in Mystic has been accepted for inclusion into the show so that will be gallery showing number two for me for the year.  Mo - I think you'll be pleased with the photo I submitted - thanks for the encouragement! 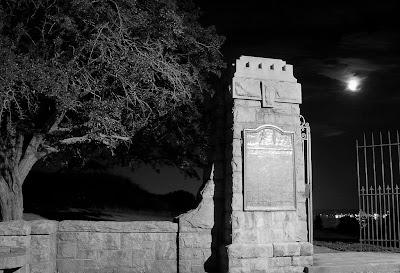