Five on Friday - Simon and Garfunkel 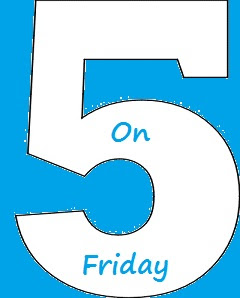 I missed Travis' Five on Friday meme last week but wanted to make sure that I joined in this week. If you'd like to join in sometime, too, it's really very simple. All you have to do is:
and poof! - you're playing along!

This week I decided to go with one of my very favorite duos made up of two gentlemen who have outstanding voices on their own and then when you put them together it equals just about perfection:  Simon and Garfunkel.

Paul Simon and Art Garfunkel grew up just blocks away from each other in Queens, New York and met in 1953 while they were both in elementary school performing in their school's production of Alice in Wonderland - Simon as the White Rabbit and Garfunkel as the Cheshire Cat. Their friendship continued throughout their school years and in their junior year of high school they began performing together as Tom and Jerry, with Simon as Jerry Landis (whose last name he borrowed from a girl he had been dating) and Garfunkel as Tom Graph (so called because he was fond of tracking - aka graphing - hits on the pop charts).

In 1955 they began writing their own music with their first professional recording Hey, Schoolgirl on Big Records in 1957 hitting #49 on the Billboard Magazine charts. After that the group split up while each went on to separate colleges but they reunited in 1963 and found prominence as part of the Greenwich Village folk music scene. In 1964 they broke up again while Paul Simon went over to England and toured provincial folk clubs and then reunited again in 1966 when their single The Sounds of Silence hit #1 on the pop charts.

Their fifth and final studio album Bridge Over Troubled Water was released in January of 1970 with the title song  staying at #1 on the charts for six weeks.  Simon and Garfunkel went on to win Album and Record of the Year with it at the 1971 Grammys but it was the end of the line for the duo that just couldn't seem to get past their artistic conflicts to stay together.

Since then, the duo has reunited for tours several times with the most notable being their free concert in Central Park on September 19th, 1981 that drew over 500,000 people.  Obviously I'm not the only one who liked their music!  Their latest tour "Old Friends" will kick off this July in Vancouver, British Columbia with a stop here in Connecticut at the Mohegan Sun Casino Arena on July 29th.  As much as I'd love to go, I can't afford the tickets but if I could, I'd be right there with the rest of the audience singing along to songs that light the memories of my childhood and bring back simpler times.  Ah well, it doesn't cost me anything to pop in the CD!
Posted by Linda at 4/30/2010

Email ThisBlogThis!Share to TwitterShare to FacebookShare to Pinterest
Labels: Five on Friday, Simon and Garfunkel