While visiting my mom earlier this afternoon I read the following Twitter update on my iPhone from Amanda:

OH.  MY.  GOD.
Knowing that she had been anxiously waiting to get some word back on her application to the Montserrat College of Art, I had a sneaky feeling that the mail had come and she'd gotten a letter.  I thought that especially might be the case considering that I had spent a good deal of last night tossing and turning and wondering how on earth we were going to swing the financing once she got accepted.  There was no doubt in my mind that she would be accepted as how could she not?  The kid has talent even if she doesn't think so herself!

Placing a quick call to the kid I was greeted by a rather enthusiastic voice and the announcement that yes, she had been accepted and that she had also been awarded a $20,000 scholarship towards her four-year BFA degree based on her portfolio.  Granted, $5,000 a year is only a drop in the bucket when it comes to college costs these days (a bucket that seems to get larger and deeper every year) but it's a pretty good size drop and I'm very pleased that she received it.  Pleased and proud.

Arriving home from Mom's, I read the official acceptance letter: 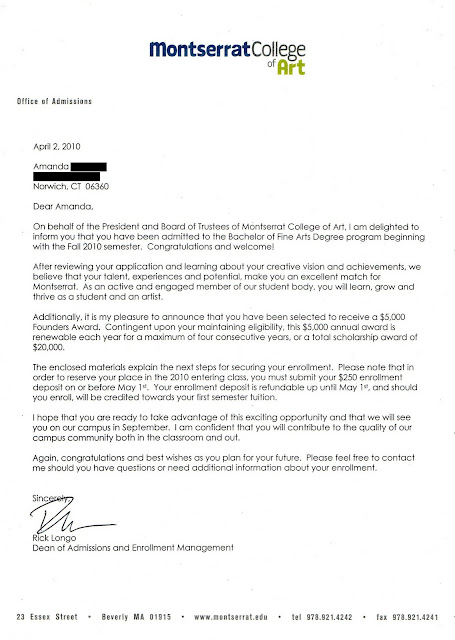 Along with the Letter of Acceptance was a packet of information which includes the forms for sending in the deposit to hold her spot in the Fall 2010 class ($250) and the form to hold her a spot in housing ($275).  Ouch.  The college is holding an "Accepted Student Day" on Saturday the 17th that we'll be attending that will give us a lot more information on what to expect.  Having only been to the campus once in December, I'm looking forward to seeing it again at hopefully a warmer time!

While I am extremely proud of her and very happy for her, I am still totally stressed out about the whole financing thing as, to be honest, attending Montserrat is not going to cheap - not by a long shot - but it's the best place for Amanda to develop herself as the artist that she wants to be.  It's a small college with only 340 students that puts the emphasis on art and it's going to give her the training and the confidence that will carry her through the rest of her life following a passion that can become a wonderful career for her.  Most people don't get the chance to live out their dreams so it seems like not figuring out how she can go there would be a crime and depriving her of the chance of a lifetime.

So ... I'm going to start going to New York City on weekends and find a nice corner where I can set up a can for donations ... maybe enough people will take pity on me and throw a quarter or two in!  At that rate, I should have the first $525 I need in about 6 months!
Posted by Linda at 4/09/2010