An Update on My Youngest 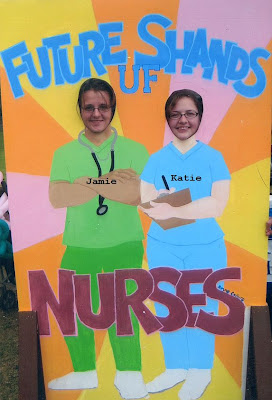 For those of you who may have been wondering how Jamie is doing, I haven't written anything about her time at the Florida Youth Challenge Academy as I had been told that it was frowned upon to do so by the hierarchy there but recently Jamie sent me the above picture and asked if I would post it on my blog and let people know how she's doing.  Apparently the rules aren't as strict as I was led to believe and Jamie even gets to read my blog every once in awhile in one of her classes so I didn't want her to think that I didn't want to post about her - I was just being cautious.

Anyhow, all that said, the picture above was taken at the March of Dimes March For Babies Walkathon that Jamie recently participated in with her platoon - an 8.5 mile walk and she did the whole thing!  Her friend Katie, whom I have had a letter from and is one of Jamie's good friends that she's met at the Academy, posed with her but only under the condition that she could be the female!

From what I get from Jamie's letters, she's really doing well at the Academy and has been learning a lot as well as getting into pretty good shape with all of the physical training that they do.  She loves her classes and says she's made some good friends, too.  All in all, it sounds like it has been a really positive experience for her.

Her goal is to be able to score high enough on the next Armed Services Vocational Aptitude Battery test to be able to do a delayed-enlistment for the Air Force.  She told me that the Air Force takes a lot of their recruits from the cadets at the Academy, she just has to score high enough to be one of them.  I sent her a study guide awhile back and she says she's studying diligently with it.  The test should be sometime this month so keep your fingers crossed that she scores what she needs to in order to enlist.

Granted, Jamie won't be 17 until July and can't go into the Air Force until after that with parental permission but I really think she would be fine with it.  I went in when I was 17 right out of high school and if I'd had any brains, I would have stayed in longer than the 5 years I did.  Jamie would have the definite advantage of having lived in a boot camp-type atmosphere already and would be familiar with the discipline required - something that is very difficult for a lot of recruits to get used to.

I finally had the chance to talk to her on the phone last week (she gets one 5-minute phone call per week on Mondays when I'm at work and she kept misplacing my cell phone number) and she sounded really good and very happy.  I honestly think that her time at the Academy may have been the best thing in the world for her as it's given her direction and stability and the chance to learn discipline and respect.  I really can't wait to see her in person to see how much she's matured since I last saw her.

I'm really hoping that I will somehow be able to get down to Florida for her graduation on the 12th of June as her graduation from the Academy will also be her high school graduation and that's something I don't want to miss.  I've been looking into Amtrak and going that route as I really would rather not fly but it's still something I'm working on and no definite plans have been made yet though the way the time is flying, I'd best make up my mind here pretty soon!

For those who have written to her, she said to tell you that she has really appreciated all of the cards and letters and I've got no doubt she has as Mail Call was always one of the most important things when I was going through Basic Training in the Air Force.  It always helps to know that people out there are pulling for you to succeed and the support you've shown to Jamie has been fantastic. Not only does she appreciate it but I do, too!  If anyone else would like to write to her, let me know and I'll be happy to send you her address - I can pretty much guarantee that she'll write you back, too!
Posted by Linda at 4/06/2010