Today's Cinco de Mayo pictures are brought to you courtesy of last year's trip to California where I had the extreme pleasure of getting together (again) at my favorite Mexican haunt in Stockton with blogging friends Katherine and Sandee along with Sandee's handsome hubby.  Zane, as the designated photographer, took the picture below as we were relaxing at the bar after Katherine and I had driven up from Santa Cruz where we had spent a wonderful day exploring her town.  Such happy memories that picture evokes! 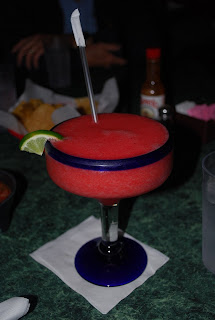 The Cancun Mexican Restaurant is nothing fancy but it's been a favorite of mine ever since I lived in Stockton long, long ago in what now seems like another lifetime. My friend Cyndi and I visited there quite frequently and it was even one of the most popular places for take-out when hungry 911 dispatchers at the police department were in need of a meal.  It's so much easier to dispatch emergencies with a full tummy and would have been even easier had we been allowed to sip on a margarita like the one to the left but alas, the line had to be drawn somewhere!

Since leaving the Stockton Police Department and California behind, Cancun has still managed to become a place where I have very fond memories of good times with new friends that I met through the wonder of the internet and this little thing that we call blogging.   For those of you who haven't had the extreme pleasure of meeting Katherine or Sandee in person, you've got no idea what you're missing as two nicer ladies (as well as their significant others) can't be found on either side of the country. 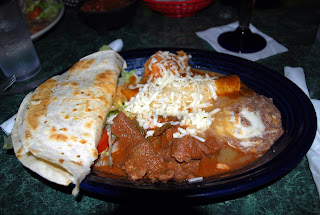 I'm hoping that someday I'll have the chance to get together with them again and share laughter and our lives over a margarita or two as well as a big ole' plate of really, really good Mexican food - the likes of which I'm never going to find here in Connecticut!

Honestly, it makes the really, really long plane flight more than worth it as you just can't beat the combination of good food, good friends, and good times.  ¡Le falto, señoras!
Posted by Linda at 5/05/2010