A Little History and a Recipe 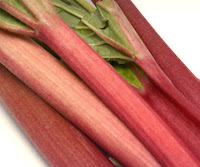 As I had briefly mentioned last week, my friend Rhonda gave me a big bag of fresh rhubarb as well as some strawberries so that I could pretend I was Betty Crocker for a little while and bake a strawberry-rhubarb pie - something that I have only done once over the course of my lifetime but which turned out to be a big hit at work.  Rhonda's timing couldn't have been better as a fellow co-worker had been asking me just the night before when I was going to make "another one of those delicious pies"?


Travis Cody said...
I've never had rhubarb. In fact, I didn't really know what it was so I looked it up. So it's a tart botanical veggie that gets used like a fruit?

That pretty much sums it up, Travis, as rhubarb sort of looks like red or pink stalks of celery, however; to elaborate just a little further I found this great bit of information at SpecialityProduce.com:


"Originally the ancient Chinese cultivated rhubarb for its medicinal properties. Used for a laxative effect, rhubarb didn't gain acceptance as a food in the United States until the late 1700s and only after the truly brave experimented with its seriously tangy culinary attributes. In 1947, rhubarb was legally classified as a fruit even though botanically rhubarb is a vegetable. It was the United States Customs Court in Buffalo, New York, that ruled rhubarb to be a fruit since it was used mainly as a fruit. This cost-effective act allowed imported rhubarb to pay a smaller duty than if it was a vegetable. Dubbed "pie plant", pie was the only dish this tart treat was used for in early days. The good news is that today's innovative chefs are reinventing rhubarb and creating superb rhubarb specialties from yummy soups to rhubarb compotes. Quite famous in Britain, Brits love their traditional rhubarb crumble treat. In the United States, Washington State leads in the production of rhubarb with Oregon, Michigan and California following close behind. Holland also generously contributes to the rhubarb supply."

As a kid, I can remember my grandfather had three very large rhubarb plants that came back every year in the spring that my cousins and I would break stalks off of and sit on the stone wall chewing on while I'm sure we made some rather amusing faces from the tartness!   To be honest, rhubarb pie was NOT on my list of favorites but as I grew older and my tastebuds gained some maturity, I discovered that if you added strawberries in with rhubarb you got one very tasty pie - especially if you went one step further and made a "custard" that went over the top of the fruit before you baked it.

Being that I had promised to bring a pie into work with me today I took the time last night to make two strawberry-rhubarb custard pies using the following recipe that I modified just a bit as the pie plates I own are 9-inch deep dish pies that require more filling than what is called for here.  Luckily I'm good enough at simple math to know how to halve or double a recipe!  The basic recipe is:

Place strawberries and rhubarb on bottom crust. Mix all other ingredients well; pour over top and spread around fruit. Top with solid crust or make a lattice weave for top crust; flute edges. Preheat oven to 400 degrees. Turn down to 350 degrees and bake pie for 35 minutes or until rhubarb is soft.

The other difference is that I put half of the fruit in the pie plate and topped it with half of the custard and then put the rest of the fruit in and topped it with the other half of the custard.  Layering seems to work just a little bit better especially considering that I use a crumb crust on top rather than a full top crust or lattice crust.  The crumb crust couldn't be easier - you just use 1/3 c. softened butter or margarine; 1/3 c. flour; and 1/2 c. sugar and cut it together with two knives (or a pastry blender) until it forms a crumbly consistency.  Sprinkle it over the top of the pie, put it in the oven, and voilà! 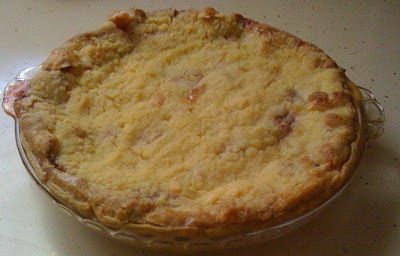 Oh, and as for the baking time, I had to adjust that, too, as 35 minutes was nowhere near long enough for these pies to cook - it was more like an hour but I kept a close eye on them during the baking process.   The other thing to watch out for is that the filling will probably run over a bit so you might want to put a piece of foil underneath the pie plates unless you like cleaning the oven!

Having not used this particular recipe before, I figured it was my duty to taste-test a slice of pie before bringing one into work with me this afternoon so guess what I had for breakfast? 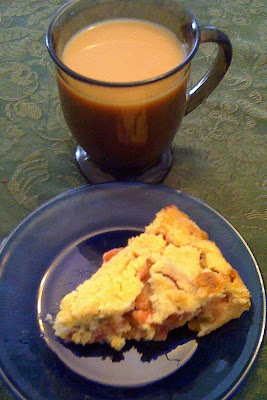 Sorry for the quality of these pictures but they were taken with my iPhone as I was just in too big of a hurry to get a bite of pie to take the time to dig out my Nikon for a better shot!  As for how it came out?  I'm happy to report that it is delicious!  I'm sure the folks at work will be pleased as will Amanda who had to suffer through the wonderful aroma last night while they were baking but hasn't had a slice yet as they were still too hot when she went to bed.

In conclusion, Martha Stewart you've got nothin' on me - at least not when it comes to baking!
Posted by Linda at 5/17/2010