As a rule, June 18th is always a rather important date in my household as it marks not only the occasion of Amanda's birth in 1992 but also my mother's birthday a good number of years earlier!  This year it's made even more special as later this afternoon Amanda will be walking across the football field at Norwich Free Academy to climb the steps to the podium and receive her high school diploma - shake with your right, receive with your left.  Personally I think it's pretty cool to be turning 18 and graduating on the same day though it makes for a rather discombobulated title to this post!

For this week's Five on Friday meme I decided to go with five songs from 1992 and one additional song that Amanda asked that I include that is currently one of her favorites by a group named Ludo. The song inspired one of her more recent art projects: 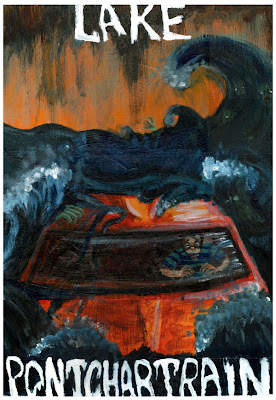 Amanda tells me that there's a story to the song but I'm not quite sure what it is and I can't ask her as she's out to breakfast with her father right now - a guy she hasn't seen in four-and-a-half years but to his credit gave her one heck of a bear hug when he came by to pick her up a few minutes ago.  It almost brought tears to my eyes, sentimental sap that I am, as even though he and I have had our differences and I am none too thrilled with the fact that he hasn't had anything to do with her since October 2005, he's still her father and I hope that he'll appreciate the person that she's become rather than dwell on the things that he may not "approve of". I'm pretty sure he lost the right to be disapproving long ago but anyhow, enough of that ... today is a very happy day and I'm not going to abide by any negativity!

I hope you enjoy the rather mixed-bag of music and I also hope that everyone has as nice of a Friday, June the 18th, as I intend to have!