Greetings from hot and humid (really, really hot and humid!) Florida!  I'll be heading out for Jamie's graduation ceremony in a little bit but had some time to post a few pictures from yesterday's flights prior to leaving my air-conditioned hotel room and walking head-on into a wall of humidity.  Thank goodness my rental car has a good a/c system!   When I watched the weather last night the guy said that it was going to be 95 today with a heat index of 100 ... yep, it's June in Florida!

Anyhow, when I left Bradley Field in Hartford yesterday it was overcast and 61 degrees.  My flight left right on time at 12:50.  I didn't dig out the Nikon so all of the following pictures were taken with my iPhone; this was my view to the left: 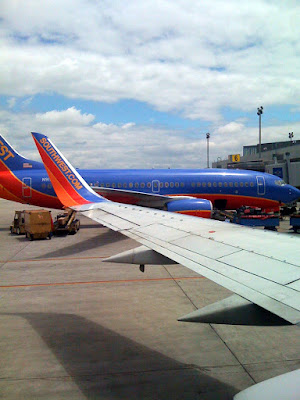 And this was my view to the right: 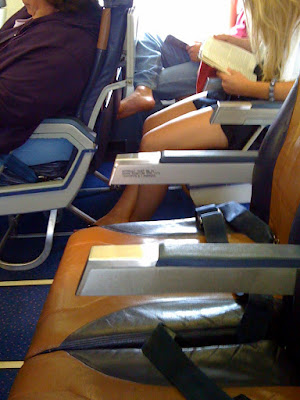 There is nothing I like better when flying than to have all three seats to myself!  I was able to stretch out and apparently fall asleep during most of the flight whilst listening to "Pride and Prejudice" on Audiobooks on my iPhone.  Matter of fact, I need to go back and relisten to a couple of chapters!  Before I drifted off though I took the time to enjoy the view. 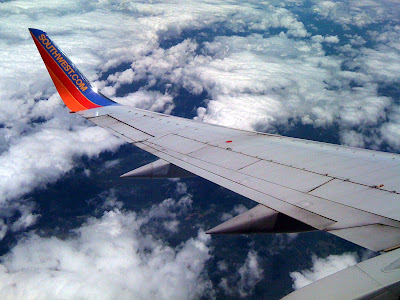 A little ahead of schedule we began our descent into the Tampa Bay area where I was supposed to have a 55-minute layover: 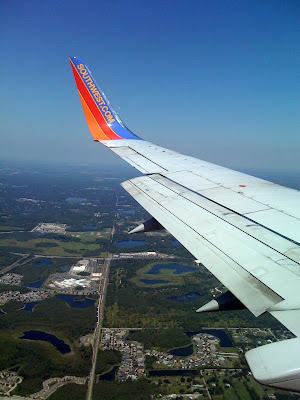 That 55-minute layover turned into a 3-hour layover when the plane that I was supposed to get on for my connecting flight had "maintenance issues" that were originally supposed to take one hour to fix and then two hours to fix and then became a whole new plane that was coming in from Buffalo.  Sigh ... Finally at 7:45 this was the few to my right ... 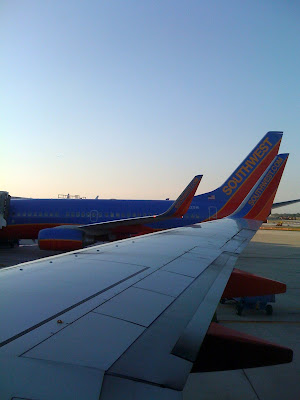 The few to my left was one empty seat and one other passenger in the aisle seat so it was almost as good as having the row to myself. This flight was decidedly more crowded though not quite packed. 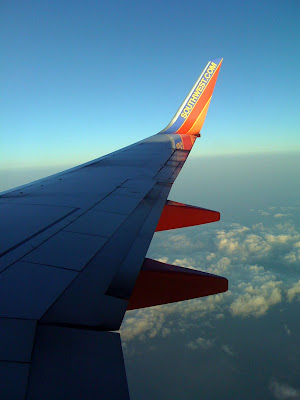 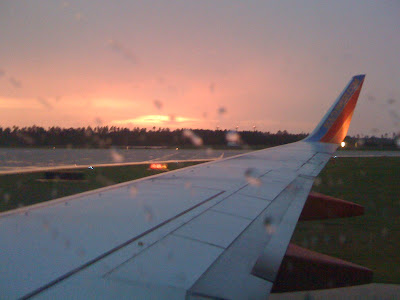 Yes, that would be rain on the windows!  And not just a light rain but a pretty good downpour.  From what I later heard on the news we had just missed some pretty severe storms with lightning that struck five houses in the area. Rumor has it there could be more of those around today but by then we should be safely eating lasagna in Valdosta!

After getting my rental car I made the 27-mile drive down to Orange Park and checked into my hotel around 10:00.  It's nothing fancy but it's clean and comfortable and I had no problems falling right to sleep after watching the news.

So, it's about time to get ready to head over to the venue for Jamie's graduation and meet up with the ex-husband for the first time in over four years.  That may explain why I'm not feeling so great at the moment but I'm sure it'll be fine, right?  I'll let you know!
Posted by Linda at 6/12/2010