I now remember what it was all those years ago as a kid living at MacDill Air Force Base in Tampa that I never liked about Florida - it's too darned hot!  I may not remember about much about 1967-1968 but I sure remember that and it really hasn't changed at all since all those years ago.  In fact, I think it's gotten hotter but that's probably because I'm older and feel the heat more than I did as 9 or 10 year old.  Anyhow, all complaining about the weather aside (and rumor has it's cold and rainy in New England!), it's been a very nice trip so far in spite of the three-hour delay sitting in Tampa the other night.

I survived seeing the ex after close to 6 years and even sat quite civilly with he and his wife during Jamie's 2+ hour graduation ceremony which was really quite impressive and more than worth the trip to come down here for.  It's hard to believe that my youngest has graduated before her sister but she's got the diploma and the big smile to prove it: 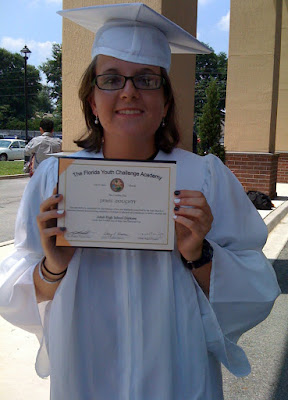 At the end of this week I'll be attending yet another graduation ceremony and I'm willing to bet there's a diploma and another big smile at the end of that one, too!

After the ceremony, Jamie and I drove up to Valdosta, Georgia for some of the best lasagna I have ever sunk my teeth into at the home of Barb and her parents.  I'll write more on that later and maybe even come up with a picture or two once I can get them off of my camera (I forgot the cable at home) but let me just say that it was a wonderful time and I kept Barb up WAY past her bedtime as we yakked well past midnight while sipping Chianti and solving the world's problems!

On Sunday Jamie and I drove down to Saint Augustine and I'll have lots to post about that later on.  Today it's further south to meet Bee and Charlie but hopefully not before I've had a chance to meet Sandy.  I'll keep ya posted!
Posted by Linda at 6/14/2010