This past Wednesday I made the hour-and-a-half round-trip trek to West Hartford so that I could retrieve my picture of the Brooklyn Bridge from the CT+5 Art Show gallery; it was either that or have it tossed and I figured that the frame and matting were more than worth the drive!

Following that, I met up with my friend Rhonda and we made our way south so that we could check out the Connecticut Academy of Fine Arts 99th Annual Juried Exhibition that is being held at the Mystic Arts Center. 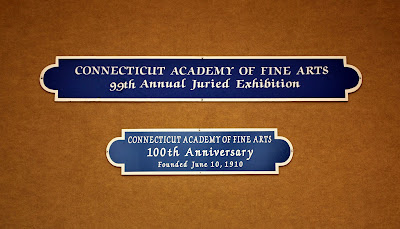 The show doesn't have its opening reception until this coming Thursday evening when they give out awards to those pieces that garnered them and at that time the place will most likely be packed with local patrons of the arts.  I wanted to see the showing but the opening reception up in West Hartford had left a rather bad taste in my mouth so I figured that if I wanted to see my picture on display along with the other entries without all of the surrounding hubbub then we needed to go at a time other than the opening.  Fortunately, the show actually opened on the 28th of May so Rhonda and I were able to pop in late Wednesday morning and have the gallery almost entirely to ourselves. 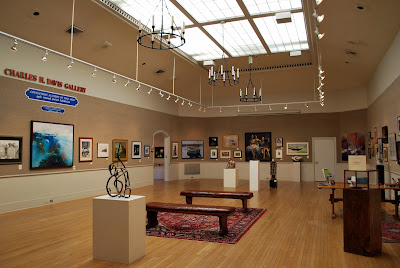 Now, I'm not sure how well you can see it in this picture (hopefully it biggifies if you click on it) but the big painting in the middle on the far wall was crowned "Best of Show". It's an oil painting of three ballerinas at rest and it carries a pricetag of something like $20,000.  Rhonda read the price, I just admired the painting!  The other big one over to the left (the blue one) was awarded Second Place and it was listed at $13,800 - or something like that.

Even though they were both nice paintings and obviously a lot of work had gone into them, they weren't my favorites in the show.  Instead I really liked the following paintings that tend to lose something as photographs because you can't see the play of light that both paintings had.   I found them both to be quite captivating and beautiful and was rather surprised that neither had garnered any sort of award at all.  Ah well, as they say "art is subjective", right? 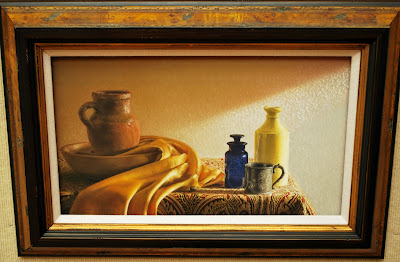 What you can't see very well in this picture is that this painting gave one a definite sense of texture; I could have sworn that the stucco effect on the wall was something that you could tangibly feel as it looked so "there" but nope, it was strictly an effect of the paint itself.  I thought this was one of the most beautifully done still lifes that I have ever seen. 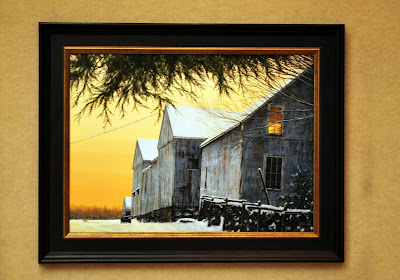 The picture above was actually my very favorite as it was almost like standing outside and watching the sun set and lighting the sky a golden hue, again the picture just doesn't do the painting justice.  Truth be told, I'm a sucker for well-done landscapes and I thought this was one was very well done. 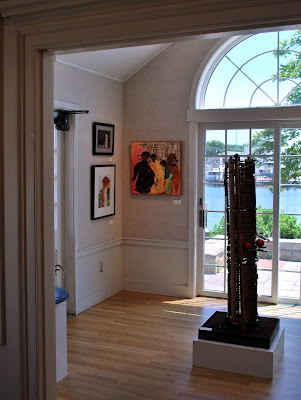 As for my photographic entry into the show, it was located in a rather nice corner of the gallery near a lovely french door that gave one a beautiful view of the Mystic River outside.  Mine is on the top on the left; it was hard to get a picture of it without reflections on the glass so this is the best I could get ... 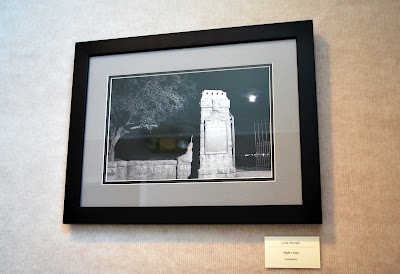 Oh, and I appear to have changed my name in spite of having corrected it on the entry form before dropping off my picture prior to the show's opening. I guess I've somehow managed to become Swedish!  I really do need to work on my penmanship if that's what my name looks like these days! 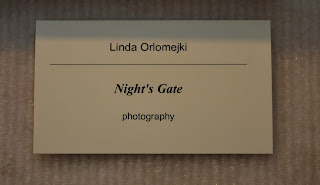 Following our tour of the gallery, Rhonda and I took ourselves off to The Olive Garden and had a lovely luncheon of unlimited soup, salad, and breadsticks followed by dessert that we probably should have skipped but decided to have anyway!  Hey, sometimes you just gotta have dessert and what better time than after having viewed some nice artwork?  After all, dessert is cultured, right??
Posted by Linda at 6/06/2010