On the Whole When It Comes to New England, I'm Less Than Some and More Than Others

Recently the undisputed king of all magazines in New England, Yankee, had an article entitled "How New England Are You? 75 Things Every New Englander Should Do" by Ian Aldrich.  Even though I was raised an Air Force brat and called a good number of other states home before I settled down in Connecticut for good back in 1986, I have always considered myself to be a New Englander so I decided to take a gander at the list and see where I stood amongst my northern peers.  All things considered I think I did okay ... perhaps some of my other New England friends might agree?

Know the Pain That Came With Being a Red Sox Fan Pre-2004
It hasn't always been about pink hats and multiple World Series titles, folks. Johnny Pesky holding the ball ... Bill Buckner and Game 6 ... Bucky Dent in '78 ... and Aaron Bleeping Boone. 'Nuff said, right?  (And this doesn't even cover the '75 World Series when the BoSox first broke my heart against the Cincinnati Reds while I was still a teenager!)

Talk About the Big Storms Like an Old-Timer
The Blizzard of '78:  Winds as high as 100 mph were recorded, and that snow--55 inches of the stuff in some parts. (Yep, it were a bad 'un!)

Eat Your Apple Pie with a Slice of Cheddar
Like Fenway and the Green Monster ... like the month of March and Town Meeting. These two institutions were made to be together.  (If you haven't tried it, I highly suggest you do so and just remember - the sharper the cheese the better!) 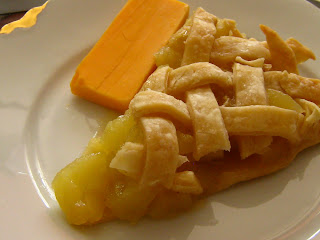 Drink Your Coffee Milk
Hey, it's Rhode Island's official state drink. You don't think a million people could be wrong, do you?  (That would be Autocrat and there's a bottle in my refrigerator as well as another in the cupboard!) Brown-Egg It
The health benefits may be debatable, but New Englanders know that when it comes to the almighty egg, those bigger, tastier brown-shelled varieties (thank you, Rhode Island Red!) put the whites to shame.  (As we like to say in these parts, "Brown eggs are local eggs and local eggs are fresh!"  There's a dozen in the fridge as I type this!)

Weave Around a Real New England Frost Heave
Frost heaves, like the Lord, work in mysterious ways, casting down some parts of the road and exalting others. We memorize the smoothest routes, until they become automatic. We become Mississippi riverboat pilots, meandering down the road, subconsciously aware of every hidden snag and mudbank.  (And some years the heaves are worse than others - good shocks are in order!) 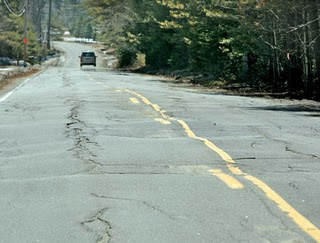 Actually Climb Bunker Hill Monument
Two hundred and ninety-four steps doesn't sound like that many at the bottom, but you feel it about halfway up the narrow spire. They should install inspirational signs along the way, like "How much do you love your country?" When you get back down, make sure to yell, "We made it!" at the park ranger. You've earned it, and he's used to it by now.  (Okay so it was 1971 when I did this - that still counts, right??)

Have an Awkward Conversation With Someone Who Won't Break Character
Maybe it was a Pilgrim at Plimoth Plantation, or maybe a soldier at a Civil War reenactment, or someone claiming to be Mark Twain--we've all been there. For better or worse, living history is alive in New England, filling our museums with authentically clad time travelers who want nothing more than to tell you about their plough or the recent wave of white plague (tuberculosis). That's the thing about having more history than the rest of the country--there's more of it to come back to haunt you.  (Mystic Seaport, Sturbridge Village ... yep, been there and done that but I was young at the time!  These days I know better!)

Grin and Bear It: Bits of Life Every New Englander Has Learned to Contend With
Blackfly season: We know not to wear dark-colored clothes.
May frost: We know not to plant before Memorial Day.
Mud season: We know enough to park and walk down that "quaint" dirt road in March.
Boiled dinners: We just know that we're supposed to like them. So we do.
Hollywood's Boston accents: We know that Matt Damon should play all Beantown characters.
(There are just some things you learn to accept - however, I could really do without the bad accents - a'yut!)

The quick skinny on the world's oldest commissioned warship still afloat. Launch: October 21, 1797, Boston's Hartt Shipyard; one of the first six ships commissioned by the new U.S. Navy. Size: 204 feet long; 220-foot mainmast (just 1 foot shorter than Bunker Hill Monument). Crew capacity: 500 (uncomfortable) men. Name game: Earned its nickname, Old Ironsides, after a victorious battle against the British in the War of 1812. Current home: Charlestown, MA. (I've actually done this one twice!  Once back in 1971 when I also climbed Bunker Hill and once again in 2002 when I got to Bunker Hill and just stood there and looked up at it!) Read a Timeless New England Book (Any of These Will Do)
A Separate Peace, by John Knowles
We Took to the Woods, by Louise Dickinson Rich
Walden, by Henry David Thoreau
Ethan Frome, by Edith Wharton
The Scarlet Letter, by Nathaniel Hawthorne
Moby-Dick, by Herman Melville
Little Women, by Louisa May Alcott
(The only one I haven't read is the one by Louise Dickinson Rich but as for the rest - of course!)

Tour the Bones in Our Closet
We may not be proud of all of our history, but that won't stop us from putting in a gift shop and charging admission. Morbidly inclined travelers can pick from an assortment of macabre New England attractions, including the Lizzie Borden B&B in Fall River, Mass.; a tour of Boston Strangler crime scenes; and pretty much the entire city of Salem, also in the curiously ghoulish Bay State. (Funny, I was just looking at the Lizzie Borden B&B on-line the other day and wondering when I could fit in a trip!  And we all know I've done Salem several times and will be there again before the year's end.) Know That Covered Bridges Weren't Covered to Keep Out the Snow
Joe Allen of Vineyard Haven, Massachusetts, who answered Yankee reader inquiries for more than 35 years in his "Sayings of the Oracle" column, had a short fuse when it came to questions regarding the origin of the covered bridge. One of his last answers proved to be the hottest: "Jesus for Guard Almighty, we thought all hands knew by this time," he wrote back to one reader. "Bridges were covered, damn fool, for the same reason women used to wear petticoats--to protect their underpinnings. Ever hear that wood rots when it gets wet? Your asinine suggestion that they were covered to keep the snow off the road is dead wrong. In fact, I recollect throwing snow inside the bridges after a snowstorm so our sleighs wouldn't grind on the wood." Rest in peace, Joe.  (Come on now, you don't think I went and took all of those pictures of covered bridges in Vermont last year without knowing this, did ya?) Know Where the Chowder Turns Red
The chowder line is that geographic boundary demarcating the place where creamy-style New England chowder asserts itself as top choice over tomato-based Manhattan chowder and clear-broth Rhode Island chowder. In the 1930s, one Maine publication went so far as to claim that the addition of tomato to clam chowder was "the work of the Reds," who sought to undermine "our most hallowed tradition," and suggested that housewives and chefs adding tomatoes be forced "to dig a barrel of clams at high tide as penalty."  (Red and clear chowdah?  Heavens no!  It's creamy or none for this New Englander!) Make a Fool of Yourself Playing Candlepin
With an all-time high score of 245 (out of a possible 300), candlepin is a game that refuses to be mastered. Some say the small balls and tiny pins make for a game of grace and precision; others claim they're punishment from God to humble smug ten-pin bowlers. Either way, the first time you strike the two center pins--and nothing else--you should learn to laugh at yourself, because everyone else at the alley already is. (Ah yes, candlepin bowling ... the height of teenage embarrassment and I remember it well!) 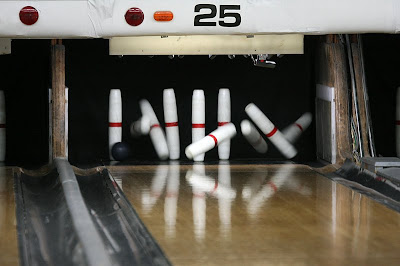 After my trip to New Hampshire and Maine next week I'll be able to check two more off of the list:

Play It Humble
Head to York, Maine, and pretend you're not a tourist by trying not to take a picture of Nubble Light--perhaps the most photographed lighthouse in the world. (My cousin Amy did this one this past summer when she was in Maine with her friend Vanessa - of course it's on my list, too!)

Ride the Scenic Railroad
Unless you've ridden the Conway Scenic Railroad through Crawford Notch in New Hampshire's White Mountains in autumn--chugging through the color, across a trestle so narrow that it seems to have no visible means of support, spanning a rushing stream 94 feet below--you've never seen the region like this before.  (As a matter of fact, I have tickets sitting on the dresser in my bedroom for this very thing!  That would be the Frankenstein Trestle that he's talking about and I will do my level best to get a picture or two provided the camera doesn't slide out of my sweaty hands!)

My thanks to Mr. Ian Aldrich for the original article and to everyone who's pictures I used for this post when I couldn't find any of my own.
Posted by Linda at 9/29/2010