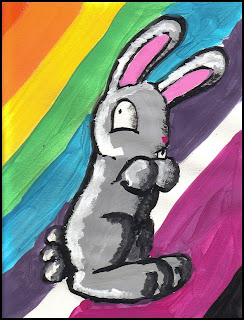 Today's version of Five on Friday is brought to you by the first day of the month and the old superstition that goes along with it that saying "rabbits, rabbits, rabbits" as the very first thing that comes out of your mouth that day will bring you good luck for the rest of the month. I did a post on this very thing back on January 2nd, 2008 which has become one of the most popular posts to pop up in my stat counter for searches - apparently it's a very popular superstition! Well ... either that or folks just liked the drawing of Amanda's "Bunneh" that I posted with it!

Anyhow, all that aside, the thought popped into my head directly after I remembered to actually declare out loud "rabbits, rabbits, rabbits!" first thing this morning (I am expecting a fantastic month full of great things now!) that perhaps I could do this week's version of Travis' Five on Friday meme using rabbits and superstitions as a theme. Of course the first two songs that came to mind were Stevie Wonders' Superstition and Jefferson Airplane's White Rabbit but I was able to hop to it and hunt down a few other songs to fill out the set.  It's a bit of an eclectic mix but that's one of the things I love about this meme - you can mix Stevie Wonder, AFI, and Jeff Beck together and it's okay!

Best wishes to everyone for an outrageously awesome October regardless of what your superstitions may or may not be and no matter what the first words to be uttered by yourself were this fine day!
Posted by Linda at 10/01/2010