I Appear to Be Easily Distracted Lately! 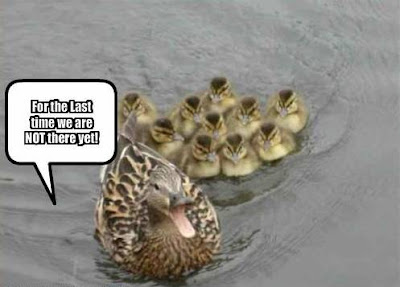 Princess Patti of Ansonia in the Valley sent me the above picture the other day as she said it reminded her of my blog.  Does seem rather appropriate, doesn't it?

Lately we most definitely are NOT there yet as I keep getting distracted when it comes to writing posts which is bad because I've still got several posts worth of pictures from Maine as well as pictures from my adventures through northwest Connecticut with Princess Patti that probably won't get posted until the dead cold of winter at the rate I'm going! It seems like there's always something else to distract me, though and I'm beginning to feel a lot like Dug in "Up" when he stops in mid-sentence ...


Take today for example, I had all good intentions of doing a post on Acadia National park but I got distracted by a photo contest that the Tourism Office in Salem, Massachusetts is having as the deadline for submission is tomorrow and I figured that I had to have at least one or two pictures somewhere in my archives that might be okay to submit. Of course, finding them amongst the thousands of picture files I have was a bit time-consuming and then trying to figure out which three might be good ... next thing I know, several hours have passed ... oy! Truth be told I'm not too hopeful about the pictures that I submitted as I didn't have as many good ones as I would have liked but I'll have next year's contest in mind when I'm up there in a couple of weeks to stay at the "haunted" rooms at the Hawthorne Hotel.

We'll be going up on December 15th and I think it's going to be a fun couple of days as I have tickets to the Salem Trolley & The Griffen Theater's presentation of  "A Christmas Carol" which is done via an interactive trolley ride along with Scrooge as he meets up with the Ghosts of Christmases Past, Present & Future on the evening of Thursday the 17th; I've been promised a tour of the Salem Marine Society room on the top floor of the Hawthorne; and I'm going to see the exhibit of The Emperor's Private Paradise:  Treasures from the Forbidden City at the Peabody-Essex Museum amongst other things.

At the end of all that, I'll attend a final review of Amanda's first semester at Montserrat College of Art on Friday the 17th then pack up the car with whatever she thinks she needs to haul back with her and head home to Norwich where she'll be on winter break until almost the end of January.  That right there is going to be the true test as to how much she and Jamie have matured!

Anyhow, considering I am probably going to take more pictures than you can shake a very large stick at while I'm in Salem, I'd best get with the program and finish up my pictures from Maine & fall in Connecticut soon so that I'll have plenty of time for those!  I just need to stop being so distracted so easily by things like ... 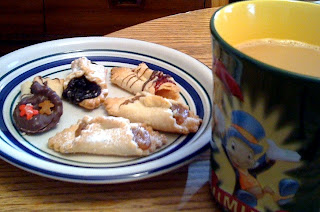 Not the best picture in the world but a favorite sailor of mine made those Scottish-filled cookies and gave me a tin of my very own yesterday and they go great with a nice cup of coffee and Bejeweled Blitz on Facebook!    A most yummy distraction!  But seriously, I need to start paying better attention to things and ... oooooh ... it's my move on Lexulous ... !
Posted by Linda at 11/30/2010