It's Been a Busy Week!

In somewhat of an attempt to recap the past week to illustrate why I haven't done hardly any blogging at all - either reading other blogs or writing this one - let me tell you what's been going on during the past week.

Last Saturday night was the annual employee party for my company which was held at the Lake of Isles Golf Course Clubhouse for which I took pictures. Technically it's called the "Holiday Party" but I've never quite figured that out so I call it the "Annual Employee Party" - either way, American is the only company that I've ever worked for that threw a party for its employees so I think it's pretty nice!

This was my second year taking the pictures and even though I enjoyed the party, it was also a lot of work.  Additionally it was a lot of work editing the pictures after the party but as a point of pride I couldn't just take them out of the camera, toss them on a web album, and call them "good to go". Maybe were I not such a finicky Virgo I could have but alas ... nope! Anyhow, if you'd like to take a look at all of that work, you can check out the Picasa Web Album and see everyone all dressed up and looking quite nice. 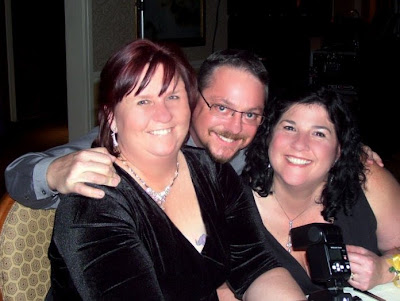 Following a rather late night of fun and frivolity at the party, Sunday's plans were for another trek back up to Massachusetts so that I could take Amanda back to Montserrat as her Winter Break had at long last come to an end.  As nice as it had been to have her home, I was ready for her to go back and I'm pretty sure that she was also!  She missed her friends at college and I missed having a living room that wasn't doubling as her bedroom! After getting the car loaded up with what looked like a ton of stuff, we made our way north with a short stop at my Mom's house so that Amanda could tell her grandmother good-bye.  It was a beautifully blue day but it was bitterly cold and windy as we drove up the Mass Pike towards Boston and points north.  When we got to the exit that I normally take for I-95, traffic was ridiculously backed up so instead I decided to detour through Boston and head north on I-93 instead.  Normally I will avoid driving through Boston like the plague but I figured that mid-afternoon on a Sunday probably wouldn't be too bad and it really wasn't.  Amanda took this shot of the Leonard P. Zakim Bunker Hill Memorial Bridge, one of the widest cable-stayed bridges in the world, through the dirty car windshield. It's not very good quality but that's what happens when your windshield is enduring a New England winter and boy, are we ever enduring a New England winter! After depositing Amanda and all of her stuff at her house at the college and giving her a hug good-bye, Jamie and I then crossed the bridge over to Salem where we were going to be spending the night at my most favorite of all hotels - The Hawthorne Hotel!  Juli, the General Manager, had offered me a fantastic rate in case I didn't want to do the 5-hour round-trip drive to Montserrat and back and I was more than happy to take her up on her generous offer!  Heck, any chance to stay at the Hawthorne is fine by me! Arriving at the Hawthorne, where by happy coincidence the State of Connecticut flag was waving in the extremely cold breeze as part of the Hawthorne's Flag of the Week Program along with the flag of Japan, I was greeted like an old friend at the Reception Desk and warmly welcomed back. I thought to myself that this must have been what it was like at Cheers when Norm would come through the door and everyone would know his name! Well ... maybe that's a bit of a stretch but I think you know what I mean! There's something to be said for going to an establishment as classy as The Hawthorne and being greeted like that; it just makes you feel good all over!

For our stay this time Jamie and I were given Room #408 which is called a "Derby Room" that has two queen-size beds and two full bathrooms with a view of Salem. To put it simply, the room is huge and if you don't have enough room in there, there's seriously something wrong!  Jamie absolutely loved having an entire bathroom all to herself and made good use of the full-size bathtub later that night. Now what would a stay at the Hawthorne be without a pose by the door?!? Of course no matter how cold it was outside, I just had to open the window and take a pictures of the view: Following that I then went exploring around the hotel a little bit with my camera as I knew there were a few spots I had missed during out last stay like the Library in the basement which is actually a nautical-themed meeting room: ... and an exercise room with what looks to be the Cadillac of all treadmills! If I had that thing at home I'd be svelte in no time! Well, not that anyone in my family would ever qualify as svelte but I'd be in a heck of a lot better shape! Fool that I am, I even bundled up and wandered outside to take a few night shots around the hotel: With fingers that were probably more like icicles at that point, I finally went back inside and Jamie and I made our way down to the Tavern for a late dinner in front of the fireplace.  Knowing that I didn't have to drive anywhere but merely had to walk to the elevator and down the hall I decided to treat myself to a House of the Seven Gables martini which is made up of Pinnacle orange and raspberry vodkas shaken with pineapple, orange, and fresh lime.  It was yummy and went quite well with my grilled cheese with bacon and tomato on sourdough with a side of the best potato salad I've had in a long time!  Sorry, no pictures as I was just too hungry and forgot to take a few shots before I dug into my meal! Jamie opted for a grilled chicken sandwich and onion rings and followed it up with Amanda's favorite dessert from our visit in December - the Chocolate Crescendo: Like every other time before, I slept like the proverbial rock so if there was any sort of ghostly activity going on anywhere at the Hawthorne I once again missed it completely! The only thing that Jamie and I noticed this trip was that there was a mysterious odor of freshly-baked chocolate chip cookies wafting through our room around 11:00 at night!  When I told Juli about it the next morning she thought it as strange as I did but hey - if the place is going to be haunted by the smell of freshly-baked chocolate chip cookies then I don't think that's a bad thing!  Unless you're really hungry though as then it could have bad repercussions!

Following a lovely breakfast at Nathaniel's (courtesy of the hotel!) and a chance to chat briefly with Juli, Jamie and I packed up to head back to Connecticut as I needed to be at work at 3:00.  It was colder than cold outside with a pretty stiff breeze and the temperature on my iPhone thermometer app reading a brisk -4 but I decided there was no way that I could leave town without taking a few quick pictures.  Jamie just rolled her eyes at me and said she was staying in the car!

First stop was at Winter Island where I took a dozen or so shots of Fort Pickering Light and another of the line of sailboats awaiting the return of better weather on dry land. From there we made our way back towards Derby Wharf so that I could get a few pictures of the frozen Friendship and the old Salem Custom House.  If you look closely at the flags on the front of the Custom House, you can see the wind was definitely blowing! The drive back to Connecticut was pleasantly uneventful and we pulled into the driveway a little after 1:00 which gave me plenty of time to get ready to go to work which is then what I basically did for the rest of the week - work and watch it snow. We had so much snow in fact that I spent Wednesday night at work sleeping on the not-horribly-uncomfortable couch in the main lobby as it was just easier to do that then try to play Nanook of the North to get home and back in a Nor'easter! Hopefully no one crept in during the night and took any pictures while I was sacked out as if they had, I probably never would have known it for when Andrew awoke me at 5:40 on Thursday morning I about near jumped out of my skin! Just goes to show, if you're tired enough, you can sleep anywhere! Eventually the sun came back out but not after we'd had another foot-and-a-half of snow dumped on top of us - snow that we are running out of places to put!  Oh, and for the record, I believe this is the first time that I've seen the Thames River as frozen over as it is.  I know I live in New England and I know we're supposed to get snow and cold in the winter but we're breaking records all over the place this year and I'd just like to kindly ask Mother Nature to stop - please!!

Anyhow, that's sorta-kinda been my week with some of the boring details left out like grocery shopping and housecleaning and shoveling a lot of that snow!  Yesterday I drove over to other side of Connecticut to pick up Princess Patti for a Girls' Day Out exploring some of the frozen western half of the state and I promise pictures of that soon!  In the meantime, I hope you've all been well and have had a lovely end of January - hopefully with less snow than we've got!
Posted by Linda at 1/30/2011