Every so often I think it's good for we as humans to be served up a healthy dose of humility and be made to feel exactly how not-smart we really are. I've taken to doing that at least once a year by taking the Jeopardy! on-line test that the show offers as part of their on-going contestant searches. 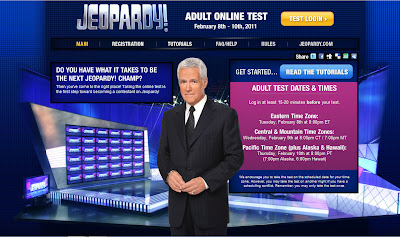 Now, not to blow my own horn or anything like that but generally speaking, I do pretty good playing along with the TV version of the show - at least I do when I get my brain to wrap itself around the answer and then for my mouth to actually then form the word(s) and it/spit them out. To actually do that has become increasingly more difficult as I wade through the brain fog that's apparently fairly normal for women of my age - annoying but normal - but I seem to know a good number of the answers, even a lot of the more obscure ones. 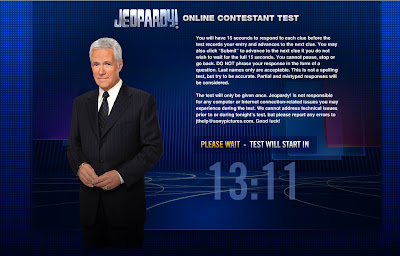 However, that is definitely NOT the case when I take the on-line contestant test for the show. OMG but I am a DOPE! I think out of however many questions there are, I'm lucky if I know the answer to 10 to 15 of them and even then, I'm not 100% sure on all of them. Honestly, I don't know how anyone would know the answers to the questions they ask unless you're a direct descendant of Ken Jennings!

Having put myself through the self-humiliation of taking the test again last night and knowing full well that I failed it miserably, it looks my dream of going to Hollywood and meeting Alex Trebek before taking home enough cash to pay Amanda's college tuition with some leftover for Jamie and I is going to have to be put on hold for yet another year until they offer the test again and I once again find myself looking at the screen and thinking "Seriously? People know this @#&^??"
Posted by Linda at 2/09/2011

Email ThisBlogThis!Share to TwitterShare to FacebookShare to Pinterest
Labels: Jeopardy