The sun was shining and it was a beautiful day here in southern New England on Friday so I grabbed the camera and the kid and we made our way down to Eastern Point Beach in Groton as I had a hankering to take some semi-sea pictures. I guess that technically the Long Island Sound counts as the sea (even though it's not anything like the seas I'll be sailing here in just one short week) and it was about as close as I was going to get as I really wasn't up to trekking over to Rhode Island no matter the nice weather. Besides, there were some things I needed to take care of in the New London area.

When we got to Eastern Point the first thing that I noticed was that it was darned hazy and I could barely make out the lighthouse on the New London side of the Thames River.  I also noticed that it was a bit chillier there with the wind whipping in pretty good off of the water but it was still a darned sight warmer than it has been for months! It sure wasn't bothering the ducks and it sure wasn't going to bother Jamie or I either as we walked out by the rocks that overlook the Sound and Jamie blatantly ignored the sign that stated that there was no climbing on the rocks allowed!  It's not like anyone pays any attention to the signs when they gather there for the annual New London fireworks display either so Jamie figured she wasn't going to get into too much trouble - besides, this is as far as she went! With the sun glinting nicely off the water, I took a group of quick shots with the Nikon before deciding to snap a shot for Facebook with my iPhone - after all it would make for a good status update! I handed my Nikon to Jamie to hold while I did that and while I was taking this picture which makes it look like we there by the light of the moon rather than the sun ... 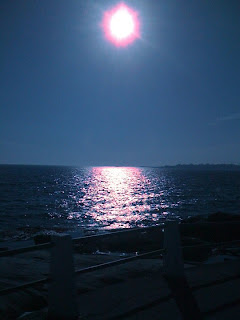 ... Jamie decided to take a couple pictures of me - something I usually frown upon as we all know I'd much rather be behind the lens rather than in front of it. Still she caught my good side ... before she followed it up with another when I turned around ... I include it simply because a) I'm smiling, b) I wanted to show off the fact that I was wearing merely a hoodie rather than a big bulky winter coat and no gloves, and c) look at that bare ground with grass showing behind me! Granted, it's brown grass but it's still grass and it's not under two feet of snow!  No wonder I was smiling!

Feeling semi-creative I tried doing some shots of Jamie with the sun in the background to see if I could get some decent silhouettes.  I ended up with this one here and another that I posted over on my photo blog, Picturing A Moment in Time.  They aren't perfect but I think they more or less came out the way that I wanted them to. Following our chance to get some fresh air at Eastern Point, we drove over to New London where I picked up my Amtrak tickets for Friday and then with both of us getting hungry we hit up the local Olive Garden for a late lunch/early dinner before we stopped at the dreaded mall for a little bit.  Ugh ... the mall ...

Upon arriving back in Norwich I wanted to make a quick stop at WalMart for a few travel essentials and I'm glad I did as just as we were getting ready to leave a very nice lady came up to me and introduced herself.  Patricia lives in nearby Preston and is a friend on Facebook via this blog; she follows me via the Norwich Bulletin though you can barely find the link there these days! She said that she saw Jamie and I from across the store and told her granddaughter that she just had to come over and introduce herself to us. Jamie found it rather bemusing that Patricia said she recognized her first but I found that about right as there are generally more pictures of the girls or the cat here than there are of me for the reason I stated above and that's fine by me.

Patricia told me that she absolutely loved my posts on the Hawthorne Hotel as they brought back lots of memories for her as she used to live in Salem just down the road from the Hawthorne.  When she and her husband first moved there they were put up at the Hawthorne for about a month by his company until they got a house and she has very good memories from there. I'm not at all surprised as it really is a magical place in a magical town.

After wishing me a very good time on my upcoming cruise and telling me to make sure I had extra batteries for lots of pictures we parted company.  As Jamie and I went to the registers to check-out she said "Wow, Mom, you're famous" to which I just laughed as Patricia is one of the few people I've met locally that reads my blog and I've been doing this for almost five years now. Still, it was very nice to meet a "fan" and a friend; I love being able to put a real life face to someone I've met through blogging as it's things like that which really makes it all worthwhile.

Oh yes and lest I forget - the new blog look is courtesy of Friday's pictures with the quote above being dedicated to one of my co-workers who is also a member of the Navy Reserves who may be deploying soon if the Mid-East doesn't settle down some. That one's for you, Chief. And that's all I've got to say about that!
Posted by Linda at 2/20/2011