Note: This being National Public Safety Telecommunicator Week, I thought that I'd go back through some of the old posts that I've written in regards to dispatching and post them over again. Some of them you may remember, some of them may be brand new to you, and some of them are almost-new to me as I sure the heck don't remember writing them! Today's post is from Wednesday, June 13th, 2007 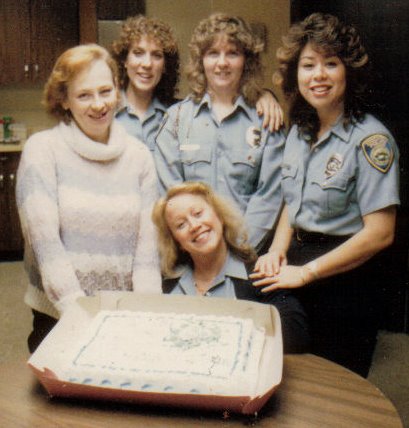 This picture was taken sometime in 1986 (my feeble mind forgets exactly when) when my dispatch team was being broken up due to seniority bids in the Command Center at the Stockton Police Department.

For those who read regularly, my good friend Miz Cyn is the one on the left in the snazzy sweater (she was pregnant with her third child) and I would be the one in the middle with the, er, 80's hair. The others are Chris with her arm around my shoulder, Kathy to my right, and Dianne down by the cake.

We were quite the team and I hated going to another shift and leaving these people behind. Matter of fact, it was the beginning of the end for my time at SPD. Just goes to show that the old adage of "if it ain't broke don't fix it" really rings true.