Catching Up With My Favorite Princess 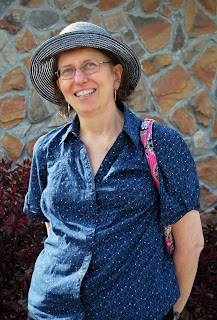 For the first time since her surgery for breast cancer in March, I had the chance to meet up with my friend the intrepid reporter Princess Patti and her entourage at a local eatery so that we could share a few smiles, laughs, hugs, and wine. Even though she has now started to lose her luscious locks as a result of the chemotherapy that she's going through, Patti was in very good spirits as she sported a new hat that she had recently purchased on-line. It has always been my own humble opinion that some people can pull off hats and some people can't (like myself) so I am quite happy to report that Patti pulls off hat-wearing with as much finesse as the Queen herself and has a lot more fashion sense than Princess Beatrice! 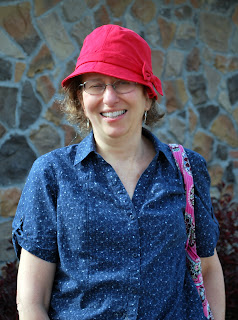 As you can see, Patti modeled not just one hat but a back-up hat in a snazzy red. Her daughter Allegra and I told her that she needed to get a different hat for each day but whether she'll do that or not is entirely up for debate. We also discussed gauzy scarfs and other head wear that might be suitable for the discerning almost-bald woman and agreed that if one was going to lose one's hair, it was best to do it during warmer weather!

Even though my own hair is no great shakes I'm not sure how I'd react to losing it; I'd like to think that I'd be able to handle it with as much dignity and grace as Patti is but I just don't know if I could. Actually, I'm not sure that I could even come close to handling a diagnosis of cancer as well as Patti has as the woman is simply amazing. It seems like she has hardly missed a beat during this whole ordeal while she's juggled her job, her family, and her illness while still managing to maintain her sense of humor throughout. Maybe in the cold dark hours of the morning when no one is looking she may have had a few moments of self-doubt and pity but you'd never know it if you were fortunate enough to spend time with her as she's still one of the most warm, caring, and funny women that I've ever had the pleasure of meeting. 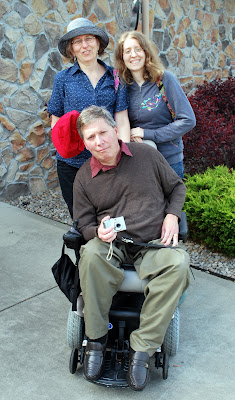 Patti's gallant husband, Ralph, and her lovely daughter Allegra joined Amanda and I for the afternoon. The girls are both Whovians but Allegra couldn't say too much about the new season as Amanda has yet to watch it and she didn't want to give away any spoilers; they did exchange Tumblr names, though, and seemed to get along quite well.  Truth be told, I had actually forgotten that they hadn't met before as I've had the chance to get together with Patti quite a few times since we first met back in March of 2008 when we were both summoned to meet with Queen Mimi at a Bertucci's in Glastonbury. Ah, what fun we had that evening and I've had a good time with Patti every single time I've had the chance to get together with her since then.  She truly exemplifies what kind of friendships one can develop from blogging and I am proud and honored to call her a real-life friend - she's definitely one of a kind!

Ralph wrote a post himself about our afternoon and if you'd like to check it out, please do so over here.  He even managed to take a picture of me that I actually like that I snitched from his blog to share with you here ... 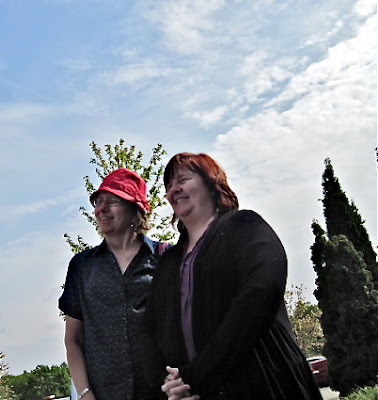 Apparently my "best side" is one viewed from wheelchair height - who knew?!? Oh, and just for the record, that little bit of blue sky that you can see in this picture was the first blue sky we saw all day and it only stuck around long enough for the photo op before the skies turned gray again!

Anyhow, before parting we made plans to meet again this summer down by the shore and raise a glass or two to the end of Patti's chemotherapy before she has to start her next course of treatment which will be five weeks of radiation. Her doctor is taking no chances on giving her cancer a chance to hang around - something I applaud as I am really looking forward to the time we all get together and raise a glass to the diagnosis of cancer-free!

In the meantime, maybe I'll do a little on-line shopping myself and see if I can add to my friend's hat wardrobe ... and I promise, Patti, that it won't be a fez even though they're cool!
Posted by Linda at 5/22/2011