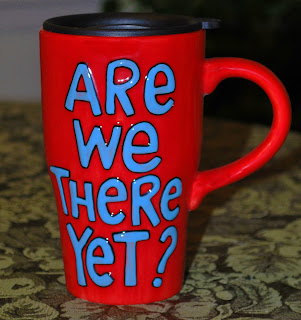 On Mother's Day I got a text message from my friend Andrew - you know, the guy who is always helping me out around the house with the things that I have trouble with like putting in the air-conditioners, plowing the driveway, etc?  Yea, that guy!  Anyhow, Andrew sent me a message that read "I have a present for you."  I was curious but didn't get to find out what it was until I went into work Wednesday morning and he handed me a box that contained that great travel mug in the picture!  He said that when he saw it he immediately thought of me and just had to get it for me.  Gee, I wonder why?  Seriously, though, it was the perfect present and really brought a smile to my face on a week when I feel like smiles have been a little short-handed.  Thank you so much, Andrew!  You truly are a fantastic friend and I love you dearly.

Speaking of work (I mentioned it briefly in that previous paragraph!), I keep being told that I'm in the wrong profession by my co-workers.  The reason for that is whenever we do a special lunch in Dispatch for birthdays and the like, I end up bringing in the cake as apparently I do a pretty good with them.  This week we were celebrating both Kevin and Chica's birthdays and as per usual I was assigned cake detail for the occasion.  When trying to decide what cake to make I knew that Chica liked chocolate and was pretty sure Kevin did also so I made a chocolate fudge layer cake then split the layers and used a chocolate buttercream frosting along with coconut to put the layers together.  I frosted the cake with the rest of the frosting and declared it to be similar to a Mounds bar.  Least ways that was my hope!  I apparently succeeded as the cake was declared to be one of my best ever by my co-workers.

I think the secret to this particular cake was in the frosting as I used a new butter that was recommended to me while I was at the Captain Lord Mansion in Kennebunkport.  In speaking to Sue, the cook, she had told me that her favorite brand was Kate's which is located in Old Orchard Beach - not too far from where we were.  She said that they made the best butter and buttermilk around and if I was ever able to find it, to try it.  Well, as luck would have it, they do have Kate's at my local Stop & Shop so I picked up both the butter and buttermilk (I needed the buttermilk for a recent batch of dark chocolate bacon cupcakes that I made) and I used both of them in yesterday's frosting.  The original recipe called for regular milk but I figured I'd give the buttermilk a try being that I had some leftover from the cupcakes and wasn't sure what else to do with it.  Turns out it worked out really, really well as even I have to admit to that being some delicious frosting!

In addition to that cake I also made a second cake to take in with me today as it's officially Chica's birthday and as she didn't know about the surprise luncheon we had, she had specifically requested a chocolate cake with the "special raisins".  Those would be raisins that are soaked in Scotch Whiskey before being baked into a dark chocolate cake in which I had a little extra Scotch.  It's become one of my more popular cakes at work ... gee, I wonder why?  Anyhow, it also being Andrew's birthday on Friday I'm hoping he'll have time to join us for cake at the end of his shift as I won't be here on Friday to bake him a cake of his own.

Friday is going to find Jamie and I on our way to the Inn Victoria in Chester, Vermont where we are going to be participating in a Work Weekend in exchange for lodging and meals.  Apparently it's a great way for the innkeepers to get the Victorian Bed & Breakfast that was built circa 1850 spruced up and ready for the season ahead and I was just lucky enough to be one of the first to respond to the email that they sent out looking for people to participate.  We're going to be doing some general cleaning, painting, gardening, planting trees and flowers, and even computer work (which I get to do) as well as a long list of other tasks.  I'm totally psyched about the adventure as I figure not only does it give me a chance to stay at another beautiful b&b in New England but there is also ample opportunity for a blog post or two or three and the chance to meet people.  I'm not too sure how enthused Jamie is about the whole idea but I noticed when they emailed out the list of who was going to be there that "Dave & Son" was listed so I'm hoping maybe the "& Son" might be someone Jamie's age.  If not, Dave can be an older gentleman and maybe the "& Son" will be my age!  Ah, one can only hope, eh?   At any rate, we're heading up Friday morning and will be back sometime on Sunday.  Unfortunately the weather forecast is calling for rain showers both Saturday and Sunday but that's okay, I'm still really looking forward to it!