How to Make Your Dispatch Partner Happy 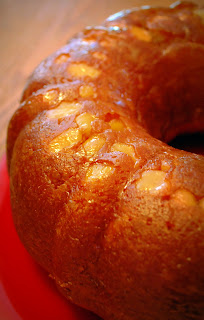 The work schedule change that I mentioned yesterday also means that my dispatch partners have changed a bit and as such, I no longer work double-shifts on Mondays with Jeff who has become more than a dispatch partner as he's also become a friend.  Feeling somewhat bad for "abandoning" him on Mondays (and Thursdays) I decided that the least I could do was bring in a cake on Monday afternoon when I strolled into dispatch at 3:00 p.m. joining a partner who had already put in 8 tough hours.  It's the least I could do, right?

Besides, lying in bed and enjoying not getting up at 5:30 had given me plenty of time to think about what kind of cake to bake.  I'm afraid I've kind of gotten a reputation at work for using alcohol in my cakes (which can be either a good or a bad thing depending on how you want to look at it!) so I knew I wanted to use something from the liquor cabinet but what to use, what to use?  Peach Brandy?  Nah ... Amaretto?  Nah ... Midori? Nah ... Though I think those all may have a future in upcoming baking experiments, I decided that I'd go with Creme de Cacao for Monday's cake.  I initially debated using a chocolate fudge cake mix with the liquor but then decided that perhaps I'd use a white cake mix instead and see what else I had in the cupboard to go along with it.  A little more thinking and I ended up with:

Directions for cake:
Grease and flour a 10-cup bundt pan and then sprinkle the 1/2 cup chopped Macadamia nuts on the bottom of the pan.
Mix all ingredients except the white chocolate chips together in a large bowl beating for about two minutes on medium speed
Put the white chocolate chips in a small plastic bag and shake up with about 1/2 tablespoon of flour to coat the chips so that they won't sink to the bottom of the cake
Pour over the Macadamia nuts in the pan and then bake at 325 degrees for 60 minutes or until toothpick inserted in the cake comes out clean.
Allow to cool in the pan while you prepare the glaze.

Directions for glaze:
After the cake is removed from the oven and while it cools in the pan, melt together the sugar, butter, and water in a small saucepan over medium heat until it comes to a boil.  Let the mixture boil for 5 minutes while stirring constantly.
Remove from heat and slowly add the 1/2 cup of Creme de Cacao stirring thoroughly.
Remove the cake from the bundt pan and then after wiping the pan out with a paper towel, put half of the glaze mixture in the bottom of the pan.  After poking holes around the top and the side of the cake with a large fork, return the cake to the pan being sure to line up the cake up so that it sits properly in the pan.
Poke holes around the bottom of the cake (which is now the top in the pan) and pour the rest of the glaze carefully over the cake being sure not to pour any through the hole in the middle.
Allow the cake to cool and sit in the pan soaking up the glaze for as long as you like before inverting the cake onto a serving platter. 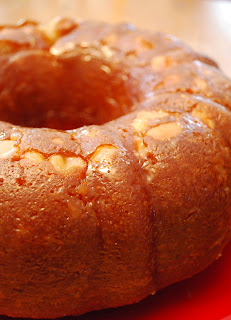 If this recipe sounds a lot like the one I posted on Saturday for the Coconut Rum Cake that's probably because it's not that much different with the exception of the ingredients being changed up a little bit.  I figured that one came out so well it had to be a good starting point for future cakes and why mess with success?  I've got future plans to try a Butterscotch Schnapps Cake using this same basic recipe and maybe even a Midori Cake though I'm going to have to give that one some more thought.  I figure if the folks at work don't mind being guinea pigs then I don't mind experimenting.  After all, Betty Crocker started out somehow, right??
Posted by Linda at 6/14/2011

Email ThisBlogThis!Share to TwitterShare to FacebookShare to Pinterest
Labels: cake