Due to a new schedule change at work my days off have altered slightly and I'm now back to working a double-shift on Sundays, evenings on Monday, and another double on Tuesdays. I know a lot of folks say that they couldn't work 16-hour shifts but the way I look at it, I'm already there so what the hey?! Plus it gives me four full days a week off which is not a bad deal at all when you get right down to it.  On Wednesdays when everyone is still looking at their weekend being two days off, I've already started mine!  As for being back to working Sundays, I really don't mind them in the least as if you had to pick an "easy" day when it comes to 911, Sundays are usually it.  Besides, maybe there will be a resurrection of "Chick Flick Sundays" and I can catch up on all those movies I haven't had a chance to see since abandoning Sunday shifts!

I took Jamie out to a Chinese buffet on Saturday for a late lunch/early dinner as we had some errands to run and she'd been craving sushi (something all three of my kids love but for which I've never acquired a taste).  After eating we were given our customary end-of-meal fortune cookie and mine read "Remember three months from this date!  Your lucky star is shing."  Well, let's see, Saturday was June 11th so that means three months away is September 11th - a day that no one ever forgets anymore.  I'll have to try to remember to look back over the three months that passes between then and then and see if, in fact, there was a lucky star shining.

Oh, speaking of Saturday, that was the day I baked the Coconut Rum Cake for Rob's birthday that I had missed, remember?  I was going to bring the cake into work with me today but after sending Rob a picture on Facebook last night, he requested I bring it in then instead. I guess I can't say that I blame him as it did look good ... 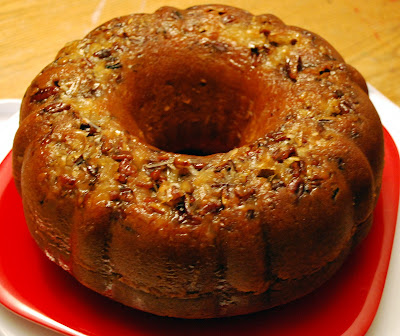 Being the nice person that I am I did as requested and stuck around for a slice myself. Not to brag but it was good - really, really good!  That recipe is most definitely a keeper!  However, having taken the cake in last night meant that was going to be no cake tonight and I like sharing any new recipes with my dispatch partner Jeff, I decided to spend some of my new-found Monday morning time off today to bake another cake to take in with me this evening. If it turns out half as well as the Coconut Rum Cake did I'll share the recipe with you tomorrow. I've got an idea for another cake, too, but I think that one's going to have to wait a bit as otherwise my co-workers are going to accuse me of trying to make them fat if I bring cakes in constantly!

Yesterday I had the chance to spend some time with extended family at a birthday party for my Aunt Eleanor. She'll be 75 tomorrow which somehow just doesn't seem at all possible. I mean, look at her - does she look 75 to you?? She sure doesn't to me! Speaking of birthdays, my Mom and Amanda will be celebrating their shared birthdays this coming Saturday when Amanda will be turning 19 and my Mom won't!  If you want to do the math, though, my Mom is her sister Eleanor's oldest sister by just a touch under two years - that should give you a pretty good hint!

Anyhow, back to the party ... naturally I took my camera along for the day and somehow I  managed to get talked into posing for a picture - something that I very rarely will agree to being that I am much more comfortable behind the lens than in front of it but I guess it's nice to occasionally be in the picture, too. The picture below is my Mom, my "baby" brother John and his wife Ann and Jamie and I. I guess you could say that it was my Mom with her baby and me with mine. Amanda was down in New Jersey visiting friends for the day so she wasn't there to be included nor was the rest of my my particular branch of the family tree; it's very, very rare that we all get together anymore. Ah well, I guess that about wraps it up for today's ramblings; it was actually kind of nice to do a post about just this that and the other thing for a change. Maybe I'll have to make this a regular Monday thing, hmmmm ...!
Posted by Linda at 6/13/2011