Five on Friday - The Homestuck Version 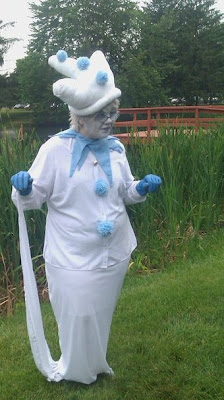 This week's Five on Friday comes courtesy of one my oldest daughter's favorite obsessions - "Homestuck". Some of you may remember when she did an art piece awhile back that was designed around a piece of music from the increasignly-popular web-comic which was titled Rex Duodecim Angelus. If that doesn't ring a bell, feel free to click here for the post I did on "Homestuck" and the stained-glass like drawing that Amanda spent a lot of time working on.

Anyhow, all that aside, even though I don't read "Homestuck" (sorry, I'm just not that cool I guess!) I do listen to quite a bit of the music as Amanda plays it a lot as did Jamie before she left for Canada. Amanda (yes, that's her in the picture dressed up as a "Homestuck" character) has been suggesting I do a Five on Friday using "Homestuck" music for awhile now so I finally acquiesced and said "sure, why not?" As a matter of fact, this post is actually going to be Five on Friday + One as I'm throwing in a bonus track just for my friend Jamie - she'll know exactly which one and why once she gives the music a listen. When it first came out Amanda made sure that I listened to it without telling me why but I knew soon enough not too far into the piece and so will Jamie!

Oh, and as a quick explanation as to the first two songs ... they are similar in music as well as similar in sound and title but just enough to be different.  As the web-comic progresses, a lot of the music in "Homestuck" comes back in different incarnations and that's exactly what happened with the first two songs but I like 'em both and couldn't decide which one to pick so you get both! If I had to pick a favorite, I'd say it was the second piece but that might depend on which day you asked me and at what point in time I was listening to it!

I hope you enjoy this week's slightly different twist to Five on Friday and as always, if you ever wish to join in on Trav's fun Friday meme, just pop over to Trav's Thoughts for the quick and easy rules and join in - we'd be happy to have you with us!