Last Tuesday evening Jamie and I began our trip up to Canada when I got out of work a little early so that we could put part of our journey behind us by nightfall.  If I was reading the maps correctly, the trip to Toronto was going to take somewhere around 9-1/2 to 10 hours so rather than get up in the wee hours of the morning I decided that we'd just hit the road Tuesday evening, drive as far as Albany which is a mere 150+ miles away, and spend the night at a cheap - but hopefully clean - hotel before starting out again in the morning.

The traffic was minimal and we made good time pulling into a Days Inn near the University of Albany just before it started to get dark.  I'd booked the hotel through HotWire and got it for a mere $40 so even though it was nothing to take pictures of or blog about, it was a decent enough place to spend the night. It certainly wasn't the type of place I've grown accustomed to lately but good enough! Rising bright and early the next morning - some of us more bright and early than others! - we were ready to hit the road again around 8:30.  Our direction of travel took us on Route 90 West (aka the New York Thruway) before we took a turn north on Route 81 towards Watertown and Fort Drum, a relatively large Army base which is home to the Army's 10th Mountain Division.  Not too far past Fort Drum we came across the last exit in the United States and Jamie started to get excited as she's been wanting to go to Canada for awhile now. My goal had been to reach the American/Canadian border by 1:00 p.m. at the latest and we did just that reaching the New York side of the Thousand Islands Bridge System right around 12:30.  We stopped for a little bit to fill up on gas (I had checked to see how expensive it was in Canada and decided that it would probably be a good idea to not buy gas there if I didn't have to as it was going for approximately $1.30 a liter) and take some pictures of the Welcome Center and the American span of the bridge. Looking up at the spindly green suspension bridge that crosses the Saint Lawrence River, I was thinking that it was probably a darned good thing that my mother wasn't with us as she hates bridges and certainly would not have enjoyed this one at all! 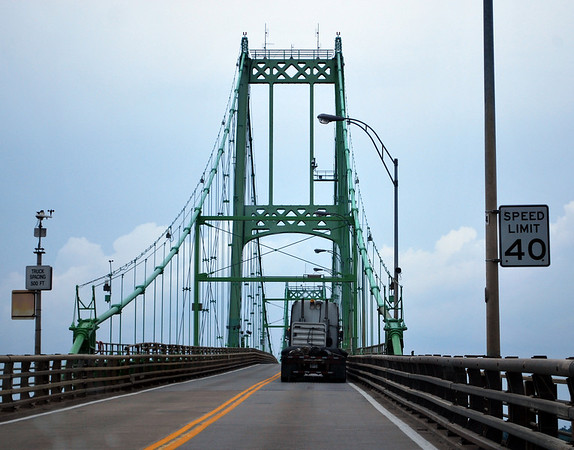 The entire Thousand Islands Bridge System extends a distance of 8.5 miles running from Collins Landing near Alexandria Bay, New York to Ivy Lea near Gananoque, Ontario; in other words, it's pretty big! I wish I had been able to enjoy the view more but alas, I was busy keeping my eyes on the road while trying to adjust to measuring my speed in kilometers rather than miles per hour.  It's trickier than you might think! Shortly after leaving the bridge behind, we approached the Canadian Border Crossing where we were fortunate enough to get a very friendly young lady who smiled broadly when, in answer to her question about our purpose for visiting Canada, I replied "Hugh Jackman is in concert in Toronto!"  She said that was definitely worth the drive though she warned me that driving in Toronto could be tricky.  It was going to be even trickier based on the fact that my GPS went into a vast nothing-ness at the American border as if the rest of the world didn't exist outside of America. I had rather suspected that might have been the case so was well-prepared with Google maps and printed directions. I dubbed Jamie the official navigator and off we went - into Canada! I'm afraid my first impressions of the Great North were less than stellar as it started to rain shortly after we crossed the border and the entrance ramp to Canada Route 401 West (the only way to get to Toronto) was blocked off for some unknown reason. There was nothing for it but to take Route 401 East for close to 15 miles before we were able to turn around at the next exit and finally make our way west and in the proper direction. My navigator decided to take a nap about an hour into the ride but I woke her up as we got closer to Toronto as she was going to need to start reading off directions for me on how to get to our hotel for the night in downtown Toronto.  Traffic was also starting to get heavy though you can't quite tell from the picture above. As we drove into Toronto on the Don Valley Parkway, Jamie got a quick shot of the CN Tower in the distance and lots of power lines up close!
We found our next stop for the night relatively easily and after parking the car in a very dark, very narrow, very low-ceilinged garage that cost $23 a night, we made our way up to the lobby and checked into our room. I had booked the hotel through Travelocity as one of their "Secret Deals" which meant I got it for a fairly decent price but again it was nothing to take pictures of or blog about. The Best Western Primrose Hotel in downtown Toronto is a'ight but that's about it.  I must say that the staff was friendly and they were good about changing our room once I told them the air-conditioning didn't work but I don't believe I'd stay there again should I ever find myself back in Toronto and in need of a hotel room. That said, it was pretty well situated in downtown and it was relatively easy to get to the places we needed to be and that had been my key consideration when booking it.

The first place we needed to be was the Princess of Wales Theater where Hugh Jackman aka Wolverine was putting on a one-man show so we hopped on a subway and then took a short walk down to the theater stopping along the way for a photo op! As for Hugh Jackman, what can I say other than WOW! He put on an absolutely fantastic show - it was 90-minutes plus of non-stop singing and dancing and interacting with the audience. Jamie and I were sitting in what could probably be called the nosebleed section of the theater (the second to the last row in the upper balcony) but we still had a pretty good view of the stage.  No photography was allowed but my friend Jamie out in Washington state was nice enough to send me some photos to use that she got from another friend of hers. Jamie is a HUGE Hugh Jackman fan and I couldn't help but think during the concert how much she would have loved to have been there. 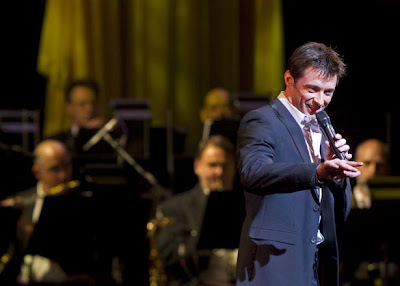 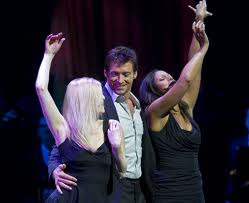 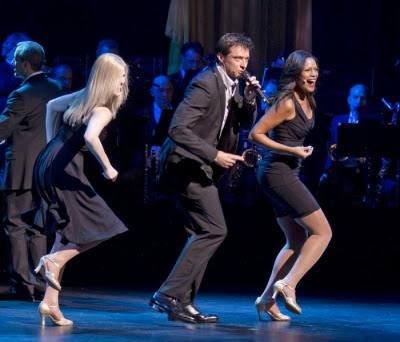 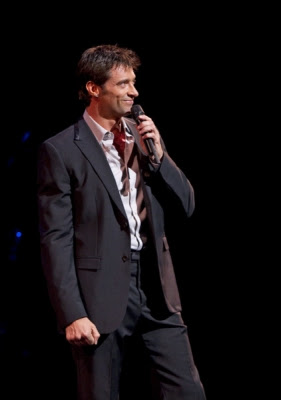 For those of you who only know Hugh Jackman from his role as "Wolverine" the man is so much more more than that and an amazing stage performer.  He began his love of musicals growing up in Australia and watching movies like "Sing, Sing, Sing", "Guys and Dolls", and "Singing in the Rain" with his very first role being in "The Music Man" when he was in high school.  He performed the opening scene from the show for us playing all eight parts of the traveling salesmen on the train and I must say it was quite impressive! Equally impressive was his rendition of "My Boy Bill" from the musical "Carousel". Honestly, "Carousel" has never been one of my favorite shows but if Hugh Jackman took it Broadway in a revival, I'm afraid I'd have to go see it - he's just that good!

I wasn't too sure how Jamie was going to like the show as even though she's also a big Hugh Jackman fan, I really didn't know whether or not she was going to like the music as Broadway standards aren't her usual fare and she didn't even really know that Hugh Jackman sang until I told her we were going to the show. As it turned out she loved absolutely every minute of the show and only wished that we had been able to sit closer - like in the front row! Of course, she knew how much those tickets cost and said she was just happy to be in the theater at all when you got right down to it. And a couple quick pictures of Saint Andrew's Church - We made it back to the hotel in time for Jamie to change clothes and make sure she had all of her stuff together before we took a taxi to the nearby Toronto Bus Terminal where she was boarding a Greyhound bus that would take her out to Winnipeg where she'd be meeting a friend of hers who had invited her out for the summer.  Her bus left at 1:00 which might seem like an odd time but it was the only schedule that didn't require her to transfer anywhere along the way.  This being her first long-distance bus trip, I wanted to try to make it as easy as possible for her - or as easy as a 1-day, 12-hour, 36-minute trip could be!

As we waited in line for her bus to board she struck up a conversation with another young lady who was also heading west and they ended up sitting together for most of the trip.  I waited until her bus pulled out taking her on the rest of her Canadian adventure before I walked back to the hotel to continue the rest of my Canadian adventure on my own.  In retrospect maybe walking alone through Toronto at 1:15 in the morning wasn't the best idea but I had no problems at all in getting back to the hotel.

Before calling it a rather late night, I snapped a picture from the hotel window and then climbed into bed and fell directly to sleep.  Ahead of me was going to be a 2-hour drive southwest to Niagara Falls but first I was going to have to navigate my way out of Toronto minus GPS and anyone to read the directions to me!  Obviously I was going to need to be well-rested!