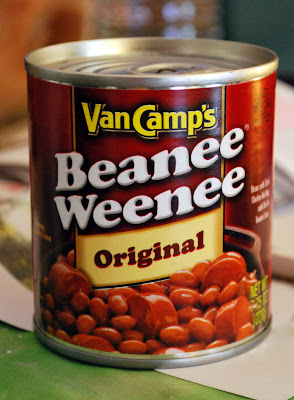 Today is the 77th anniversary of my father's birth and in honor of that I'm posting this picture.  Now, I suppose you're wondering what on earth a picture of a can of Van Camp's Beenee Weenees has to do with what would have been my father's birthday, aren't you?

In January of 1966, my Dad - who was a career military man in the Air Force and a darned fine aircraft mechanic - was deployed overseas to do his mandatory tour of duty at Da Nang Air Base in the Republic of Vietnam.  I believe that Dad was part of the 61st Tactical Wing at that time and Da Nang was considered to be the world's busiest airport with 1,500 take-offs and landings recorded on peak days.  It was also the target of a lot of bombings and my mother received many a letter that was written in very shaky script as my Dad waited out the bombings in a shelter.

This was back in the days before there was any such thing as web cameras and email so contact was limited to letters that came back to the States via snail mail and maybe - if one was very lucky - a very rare phone call.  If families today think they worry about their military members who are deployed, that's nothing compared to what families went through during the Vietnam War and the wars that preceded it. I've got no doubt that my Mom was probably worried sick pretty much every single day that my Dad was away but being made of the stern Yankee stock combined with a very stiff British upper lip that she inherited from her mother, my Mom very rarely showed any of that fear and worry that she no doubt felt as she waited for each letter to arrive.

Meanwhile, my Dad was no doubt on the other side of the world also looking forward to Daily Mail Call when he'd receive word from home or if he was really lucky, a Care Package that my Mom had lovingly put together containing some of his favorite things from the States that he couldn't possibly get his hands on in Vietnam.  As packages went over via slow boat back in those days, Mom had to be choosy about what she would include so she'd bake some of his favorites that she knew would last the long trip and also include a few other non-perishables like cans of Vienna Sausages and another of Dad's favorites - Beenee Weenees.

I hadn't seen a can of Beenee Weenees in years but on a recent trip to the grocery store, while searching the shelves for something else, I found myself looking directly at the Van Camp's label on the can of one of my Dad's favorite things to receive when he was in Vietnam.  Needless to say I had to buy a can and maybe - just maybe - I'll pop it open and eat the contents today in honor of my Dad and his service to our country all those many years ago.

Happy Birthday, Dad; as you can see, you'll never be forgotten even if it's in ways you never thought twice about!
Posted by Linda at 11/25/2011