A Photographic Year in Review

I had toyed around briefly - very briefly - with the idea of doing a Year in Review sort of post but then after deciding that it sounded way too much like work and I'm all for relaxing on this last day of 2011, that I would simply post one of my favorite photos from each month.  Of course even that was too much like work as I took an awful lot of photos this year but I finally grabbed a Baker's Dozen and called it 'good to go'!


January 29th - On a visit to Kent, Connecticut in the northwest corner of the state, I caught a shot of my favorite Princess at Kent Falls State Park. Note all the snow! February 20th - Jamie in silhouette at Eastern Point Beach in Groton as we took advantage of a sunny and not-too-cold day in February.  As brutal of a winter as we had (see above!), it was nice to be able to go out and enjoy some sun! March 1st - One of my favorite photos from my cruise on the Carnival Glory.  This was a tough pick as I took over 1,000 pictures on my first-ever cruise that I didn't enjoy while I was on but in retrospect liked more than I thought I did! April 26th - The Callender Room at the Captain Lord Mansion in Kennebunkport where I stayed when I took myself on a pleasant little trip to Maine for two days.  Talk about luxurious, the picture doesn't do it justice! May 13th - This shot was taken when Jamie and I took a trip to Chester, Vermont for a working weekend at the Inn Victoria where I made some wonderful new friends and had a fantastic time!  I've been back up several times since and Chester is just as charming every time I'm there! June 16th - I drove myself down to the town of Essex on the Connecticut River and treated myself to lunch at the Griswold Inn, the United States' oldest continuously operating inn!  Their chowder is just as delicious as they say it is! 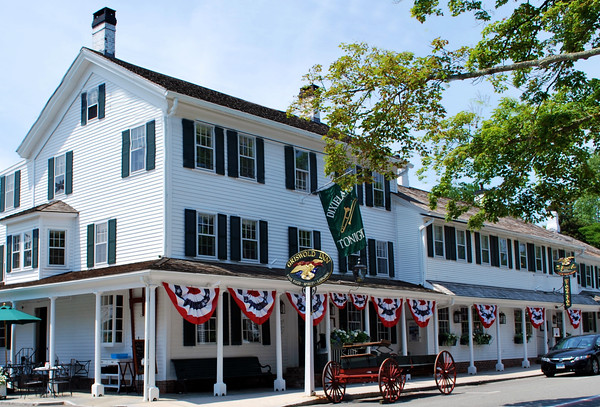 July 7th - After putting Jamie on a bus in Toronto so she could spend a few months with a friend in Manitoba, I drove down to Niagara Falls and spent several fantastic days at a lovely bed & breakfast - Kilpatrick Manor - and met one of my long-time blogging buddies, Carol, as I witnessed the wonders of the falls.  It was definitely one of my best trips of the year! August 4th - It was back to Boston for Amanda and I as we went to visit the Chihully Exhibit at the Boston Museum of Fine Arts.  Well worth the trip even though I had just been in town the week before to attend a Red Sox game with my cousin Amy!

September 28th - Speaking of my cousin Amy, I flew out to Nashville with her as she attended the International Bluegrass Music Association Conference and quite enjoyed the trip.  We visited the Ryman Auditorium and other Nashville sights - the trip was mighty fine, mighty fine!

October 6th - The Mountain View Grand Resort in Whitefield, New Hampshire was where this beautiful porch is located.  My mom, Amanda, and I made a one-night trip up to the beautiful historic resort that is located just north of Mount Washington in the White Mountains.  Definitely on my list of "gotta-go-back-there" places!

November 9th - Speaking of going back, Amanda and I went back to Salem (I have lost count of how many times I've been there this year but I've loved every single visit!)  I took this shot of the Old Burying Point near the Witch Trials Memorial and just loved the sun flare through the tree shining on the headstones.

December 2nd - Did I mention that I went to Salem a lot??  This photo is from the Clarence S. Clark House which was part of Christmas in Salem Historic House Tour that I was able to partially go on being that I had work obligations and couldn't be there for the whole event.  Still, the houses I got to see were beautiful - especially this one!

Finally, one my very favorite photos of the year was taken once again in Salem when I was there on July 27th with my cousin Amy.  It was a beautiful evening and we spent some time walking around down by the waterfront where I shot this picture of the Friendship docked at Pickering Wharf. I have been very, very fortunate to have had the chance to travel to a lot of places this past year and take a lot of pictures. It's been a year filled with new opportunities, new adventures, new and old friends, and a lot of good stuff.  Sure, maybe there were a few not-so-high points but overall I can't complain and I'm quite looking forward to seeing what 2012 has in store for me.  Just as a guess, I'd be willing to bet there's another trip or two to Salem in there somewhere!

Best wishes to everyone for a wonderful new year filled with your own lots of good stuff from which to make wonderful memories with just enough not-so-great stuff to make you appreciative of all the good stuff even more!  That's my plan for the year!
Posted by Linda at 12/31/2011

Email ThisBlogThis!Share to TwitterShare to FacebookShare to Pinterest
Labels: 2011, photography