I'll Be Westward Bound Sooner Rather than Later It Seems

For the past week or so I've had a feeling of dread - like something was just not right in the universe.  Since before Christmas I had been trying off and on to get in touch with my friend Cyndi out in California but hadn't had any success. I'd reach her husband who would let me know that she was sleeping but he'd tell her I called or I'd get their answering machine with the request to leave a message at the tone - which I did.

Unfortunately the feeling persisted that something wasn't right but I was still getting nowhere via telephone so I sent a message to Cyndi's daughter on Facebook who messaged me back this morning to tell me that her mom had been having trouble breathing due to the secretions building up in her throat from the ALS and they'd had to have a tracheotomy done yesterday so that she could be put on a ventilator.  Her daughter assures me that the surgery went well and that Cyndi is now breathing fine but for her to have to be on a ventilator is anything but good.  It means that the damned disease that is robbing her of her life is progressing a lot quicker than was hoped.

I still have a lot of unanswered questions as to Cyndi's prognosis but what I don't have is the willingness to sit back and see how much better or worse things are going to get before I fly out to California to visit her.  To be honest, I don't know how much time she has which means I don't know how much time I have to go out and visit the woman who has been my closest friend since I first met her in a dispatch center at the Stockton Police Department in 1984. 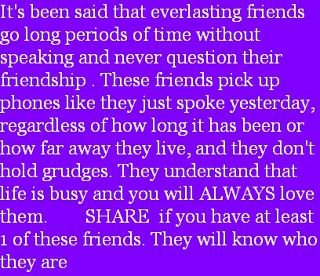 My cousin's wife had this posted on her FB wall this morning which defines to a "t" what my relationship with Cyndi has always been but the sad truth of the matter is, picking up a phone and talking to her is not really an option at this junction being that her disease has robbed us of even that. As selfish as it is of me to feel sorry for myself at all while Cyndi is the one fighting this horrific disease I can't help but feel cheated and angry and truly sorry that I no longer have easy access to a friend who - as cliché as the saying is - knows me better than I know myself.  You can't face the loss of a friend like that without feeling sorry for yourself unless you're a machine and I am definitely not a machine.

Hopefully I'll get the opportunity to speak to Angela, Cyndi's daughter, in the next day or two and then I'll know a little better what's going on.  In the meantime, I'm looking at flights to California and wishing there were more that didn't connect through Denver as changing planes there in the winter is not my idea of a good time but if that's what it takes to go see Cyndi, then that's what it takes.

In the meantime, thoughts and prayers for my dear friend are humbly requested and deeply appreciated.
Posted by Linda at 1/16/2012

Email ThisBlogThis!Share to TwitterShare to FacebookShare to Pinterest
Labels: Cyndi