Last Wednesday I Was in Boston, This Wednesday I'm Just Reminiscening! Wow, time flies when you're working triple doubles! Hard to believe that it's already been a week since Jamie and I went up to spend the night in Boston and took a very chilly walk around Boston Common and the Boston Public Gardens where I took the picture above of the footbridge over the lagoon.  That scene looks a lot different in the spring/summer when the lagoon becomes the site of Boston's famed Swan Boats that paddle back and forth on the lagoon's water as depicted in the painting below that hangs in Parker's Restaurant at the Omni Parker House where Jamie and I spent one very nice evening last Wednesday. 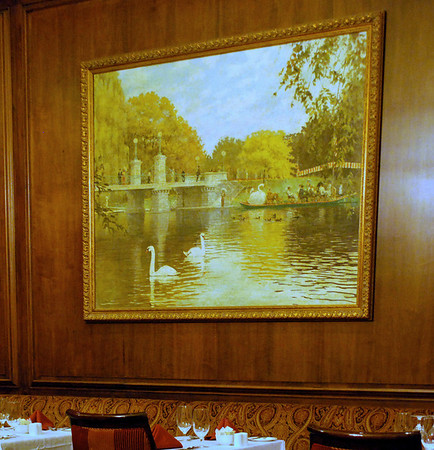 Now that I'm done with work for the week I can work on my post for The Distracted Wanderer about the Parker House which is America's oldest continuously operating hotel and truly just as wonderful as I always thought it would be chock full of history and beauty and maybe even a ghost or two! Some of that history includes future President John Fitzgerald Kennedy proposing to Jacqueline Lee Bouvier right there in Parker's Restaurant at table #40 near the Press Room where friends threw his bachelor party and where he made his first speech when just six years old at a party for his grandfather, former Boston Mayor John "Henry Fitz" Fitzgerald.

To think, I got to dine in the same place as a former President and his wife .. or at least Fiancée! Ah well, no such high-brow antics tonight as I'll be dining here at home but at least it won't be in front of the dispatch console where dinner has been served for the past three nights so I'll take it! And even though there's no Boston Cream Pie either there's still this ... A 14K Carrot Cake Cupcake from Sugar's Bakery & Sweet Shop in East Haven, Connecticut which one of my co-workers brought back for me yesterday.  Who needs pie when you can eat cake?!?
Posted by Linda at 1/25/2012