Perhaps Some Old Soldiers Fade Away but Not This One

In his Farewell Address to the Joint Session of Congress on April 19th, 1951, General Douglas MacArthur said the following words: "... I still remember the refrain of one of the most popular barrack ballads of that day which proclaimed most proudly that "old soldiers never die; they just fade away." And like the old soldier of that ballad, I now close my military career and just fade away, an old soldier who tried to do his duty as God gave him the light to see that duty."

I'm going to respectfully disagree with General MacArthur on this one as not all old soldiers just fade away, some old soldiers continue to burn with as bright of a light as they did when they were new soldiers. Old soldiers like former Army Sergeant Charles Cordle - aka Sarge Charlie - who early yesterday morning lost his valiant battle with Non-Hodgkins Lymphoma and answered the call to report to heaven and accept his reward for a job well done. 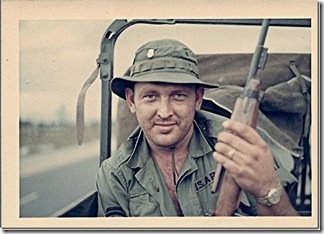 A lot of folks only knew Sarge through his blog but I was one of the lucky ones in that I had the honor of meeting both he and his wife, Miss Bee, in person not just once but several times. When Jamie graduated from the military school that she was attending in Florida in June of 2010, I flew down for the ceremony and then we drove down to West Palm Beach to meet Charlie & Bee before flying home. 
"I believe that Sarge Charlie first started commenting on my blog via the old "Bestest Blog of the Day' and shortly after that, Bee started coming around, too. Charlie has always held a special place in my heart as it turns out that he served in Vietnam at the same time as my father. Matter of fact, if my faulty memory serves me correctly he was also stationed at Da Nang where my Dad was stationed though my Dad was Air Force and Charlie was Army. It didn't matter what branch of the service they were in though, as they were serving in the same place, at the same time, fighting the same enemy and that made them comrades-in-arms.

Unfortunately, both of them being in the same place at the same time also meant that they were both exposed to Agent Orange - the effects of which eventually caused the cancer that killed my father at way too young of an age. Regular readers of Charlie's blog know that he, too, has recently been fighting quite the battle with cancer as a result of his exposure to Agent Orange so when I finally made up my mind that I was definitely going to Florida for Jamie's graduation, I also made it a priority that I get the chance to meet Charlie & Bee in person as I admire them both tremendously: they are both cancer survivors, they are both patriotic Americans, and they share the same sort of love that my parents did - that rare type that you know makes them soulmates and best friends and perfect for each other. The kind of love I wish that I had been able to find but never did."

My youngest daughter and I were treated to a delicious home-cooked meal that evening - which Charlie said was a rare treat indeed as Miss Bee didn't do that much cooking anymore but boy howdy did she put on the dog that evening and it was all delicious!  There was even a home-baked cherry pie to top it all off!

The next morning they picked us up at our hotel and took us out for breakfast at John G's, a place I had often heard about on both of their blogs and which was just as good as they both said it was.  Following breakfast we were given a guided tour around West Palm Beach as Sarge drove and Miss Bee pointed out the various sights along the way.  It was a wonderful visit and I was so glad that I'd had the chance to meet Sarge and Miss Bee in person as they were exactly who they are on their blogs.  A couple of lovebirds who lived in Paradise!

At that time, Sarge was doing his best in his on-going fight against the Non-Hodgkins Lymphoma that invaded his body and even though it made him tired, it sure couldn't dim the twinkle in his eye or the smile on his face!  Old soldiers don't fade away, old soldiers battle on and that's exactly what Charlie was doing - giving it all he had and then some. Last February I got to see Charlie & Bee again when I went on the Blogger's Cruise on the Carnival Glory along with Sandee & Zane, Sandy & Dick, and my cabin-mate Barb.  The picture below was taken in Nassau, Bahamas on February 28th and as you can see, the old Sarge was having himself a fine time even though he tired pretty easily and tended to retreat to his cabin to take a lot of naps.  Still, he was there and having a good time and he even pole-danced a little bit (something he was quite famous for on cruises!) and performed some magic tricks at dinner for us.  The old soldier wasn't fading away then either. 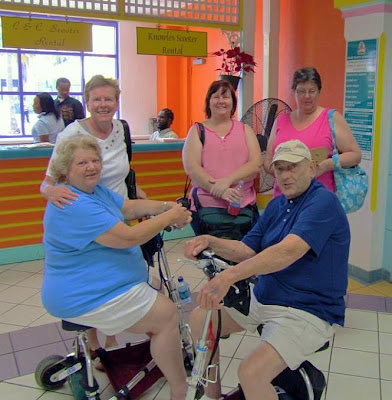 Unfortunately, though, I knew that the time was going to come when the light would eventually fade from Sarge's twinkling eyes and he'd make his final roll call as he was battling a cancer that just couldn't be beat no matter how good his medical treatment was or how unflagging his spirit might be.  Non-Hodgkins Lymphoma is an insidious form of cancer that unfortunately will eventually win the war no matter how many battles the old Sarge might have won.  I had watched it suck the life out of my father almost nine years ago and I knew it would do the same to Charlie also.

Last week he knew that his time on the battlefield was ending when he posted last Tuesday that his time on this earth was almost over.  In typical Sarge Charlie fashion though, he thought of Miss Bee first and foremost when he wrote "I am not wanting to make a lot of people sad, but if you got a little extra love to spare, take it over to Miss Bee’s place and give her a big hug."

Way too soon for any of us, on Sunday morning Miss Bee wrote on her blog that "Heaven has a new angel today" telling us that Sarge had passed away peacefully and on Charlie's blog his final post appeared. Not one to shy away from the simple fact that none of us get out of this alive, Sarge took the time to say good-bye in his own inimitable fashion and once again in the face of his own death he thought of his beloved Miss Bee first when he wrote, "I know Miss Bee is going to be very sad when this is posted, stop by and give her hugs, over the years I learned that hugs are the most comforting thing one person can give to another." Have I mentioned that Sarge Charlie was a very wise man?

Now don't get me wrong, I'm not saying that the man was a saint - I don't believe that any man is - but Charlie lived his life to the fullest and he lived it his way. The things that he believed in, he believed in passionately; the people that he loved, he loved without reserve. He was one of the most patriotic people I have ever met and he had no qualms in letting people know that nor did he mind letting people know that he was an incurable romantic who was fortunate enough to spend 44 years with the love of his life and the woman who was his soul mate.

No, Sarge Charlie didn't just fade away - Sarge Charlie lived brightly right up to the very end and those of us who knew him, are better for the light that he shared.

Thank you, Sarge, for your service to our country which ultimately ended your life too soon. You fought valiantly and have more than earned your eternal rest - though I get the feeling you are more likely playing poker and performing magic tricks to keep the other angels amused than you are resting on a cloud somewhere! Be at peace, my friend, and don't forget to look up my father sometime! 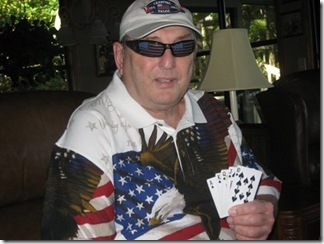