Where There is Sadness ... Joy

So ... it's been a week since my best friend of 25+ years departed this earthly life (though in my heart I know that she left us on February 14th when she went into cardiac arrest and not on the 16th when her family had to make the very painful decision to shut off life support) and my emotions have naturally been yo-yo'ing all week.  Up. Down.  Around the corner.  Around the world.

It hasn't all been tears though, there have been a lot of smiles and joyful memories.  My cousin Amy - ever the organized librarian - searched through some of her photos and found a few from a trip that we took out to California back in 1997 (one of the few times I was able to talk her into getting on a plane and flying west with me). After flying into San Francisco, Amy stayed to visit with her friend Vanessa while I continued on to Stockton to visit with Cyndi but the four of us got together to take a trip up to Lake Tahoe while we were there and thank goodness someone thought to take some pictures. Believe it or not, I didn't have a camera in my hands all the time back then!


See?  My hands are empty!  The pictures are copies of copies so the quality isn't the best in the world but that's okay, they're pictures of Cyndi and we were in our favorite place together and that's all that matters.

I've also spent some time searching through this blog and finding posts that were about Cyndi and I'm happy that there are several to be found as reading them brings her back to life for me even for just a little while.  I'm not going to drag all of them out but there were two that stood out for two very different reasons.  The first was written on October 26th, 2006 and not only was the post about Cyndi but she actually left several comments on it which was highly unusual!


"We do not remember days; we remember moments." ~ Cesare Pavese

The second post is even more special simply because of the response that it received.  I wrote it on August 13th, 2007 when Cyndi was going through a really hard time with putting her autistic youngest son into a specialized home. I wrote the post to ask folks to go by Cyndi's blog and leave her a message of support and encouragement and I have to say, the response was happily overwhelming as thirty people went over and left her a comment.

I had always told Cyndi that people in the Blogosphere were the best and they sure didn't let me down.  Re-reading those comments brought both a smile to my face and a tear to my eye as even though I've lost touch with some of them, thirty people took the time to go say a word of concern to my friend - to a woman they had never met and never would. That spoke volumes as it just went to show that Cyndi was so special that others were willing to take a few moments for her - something I always knew but something that others apparently thought also.

Truthfully I was afraid that somewhere along the lines Cyndi might have deleted her blog or made it private as she never was ever really able to get into blogging for one reason or another but thankfully it's still there and I hope that it always will be as it gives me a little piece of her.  Had I ever been able to talk her into actually blogging it would have given me a bigger piece of her but heck, I'll take what I can get!

Speaking of getting things, I had my once-a-month lunch with my friend Rhonda yesterday and being the kind-hearted soul that she is, she gave me a bouquet of flowers in remembrance of Cyndi.  I'm blessed to have a friend like Rhonda just as I was blessed to have a friend like Cyndi and am blessed with the friends I have made through this thing we all like to call the Blogosphere. 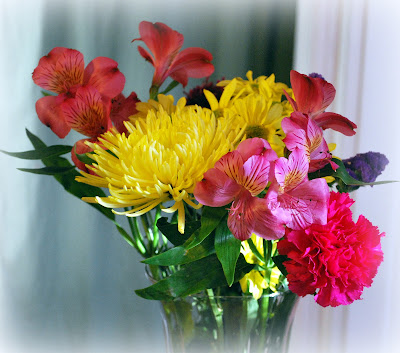 Thank you all for the support and encouragement that you have given to me during this difficult time, it honestly has meant the world to me. There truly can be joy - and beauty - in the midst of sadness.
Posted by Linda at 2/23/2012