I seem to be all about contests lately as I find myself entering yet another one and then stumping for votes - gee, this must be an election year, huh?  The latest one that I'm shooting for is sponsored by Visit Connecticut which is the official website for the Connecticut Commission on Culture & Tourism.

History and travel nut that I am, I signed up to be an official Connecticut Ambassador last fall and I've been trying to plan out some journeys here in my home state to write up in The Distracted Wanderer as it doesn't seem quite fair that I spend all of my time out of state.  Granted our Salem here is nothing like my favorite Salem in Massachusetts but that doesn't mean that there isn't still interesting places to wander to - I just have to find them and the tourism website should be a big help in that respect.

Anyhow, they are currently sponsoring a contest called "What's Your Connecticut Story" asking readers to "Tell us where your passion lies. We want to hear about the Connecticut people, places, and experiences you love most." When I first heard about it I was a bit lost as to what story I might be able to tell until I had an email from my cousin Amy yesterday. I had sent her a link from the tourism website entitled "How to See Connecticut in Five Days" and she sent me back a reply saying:


"I didn't see the part in there that says, "For added amusement at Lake Compounce, talk your wimpy cousin into sitting in the back car of the "White Knuckler" wooden roller coaster that your long-dead grandfather rode in as a child."

Ah-ha! A memory and a story for the contest was born! 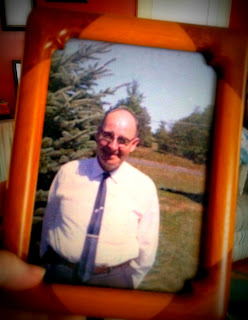 Taking a Ride With Gramp
With many thanks to cousin Amy for not only the inspiration but also for taking the ride with me, my submission for the contest can be found at the link under the picture above. If you could possibly see your way through the registration/log-in process to cast a vote my way, I would greatly appreciate it and I'm sure Amy would also as I've promised to share any sort of a win with her should there be one which seems only fair as after all, I talked her into the ride to begin with!
Posted by Linda at 3/07/2012