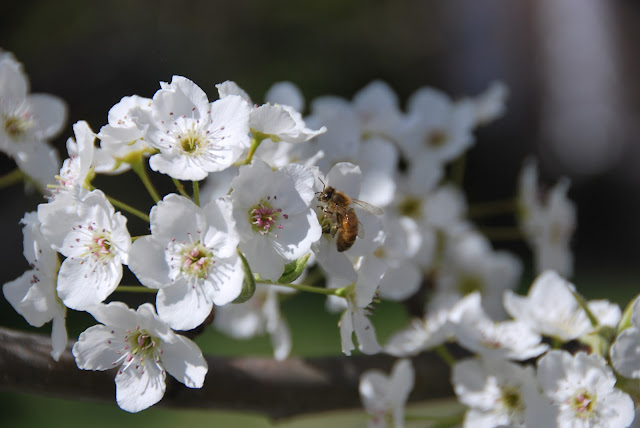 Wow, I did it again and missed another whole week in between posts!  Ooops ... I've had good reason, though, as last week I was as busy as that little fella in the picture above as I worked a whole bunch of days in a row to make up for the time that I had taken off to wander around Cape Ann and Concord/Lexington in Massachusetts and tossed in an overtime shift for good measure while I was at it.  I had two day shifts that were bracketed on each end with double shifts so it made for a long work week but it was worth it to have had six days in a row off previous to that in spite of the fact that I hate getting up early!

Saturday found me up early yet again as I had a table at the Canterbury Historical Society's Annual Indoor Tag Sale and yet again it was worth it as I made about $80 selling stuff that I hadn't even looked at in years and totally forgot I had until I dug it out for the sale.  My goal was to a) make back the $10 that I paid for the table and b) not bring back a carload of stuff - goals that were quite nicely accomplished!  Having just one table at a tag sale is so much easier than doing an entire tag sale at one's own home; hopefully I can join in again next year!

Sunday it was back to work followed by grocery shopping on Monday before work (there really WAS nothing to eat in the house this time!) and then another double on Tuesday before my short work week ended and I got to sleep in this morning before finally catching up on a bit of blog reading.  As I was so far behind in that, I used the option to mark everything as read that was over a day old (I don't recall that Google Reader had that option before but it's great!).  I just hope that I didn't miss any major news anywhere - if I did, please let me know!

I was going to spend my next four days off just hanging around the house and catching up on things but then the thought dawned on me last night that perhaps this would be the perfect chance to go spend a few days out on Cape Cod before tourist season begins and I don't want to go anywhere near the place as it's too crowded and the cost of lodging skyrockets. Provincetown is on my list of places that I need to cover for my project with the Hawthorne Hotel plus there are lots of lighthouses out there that I just need to photograph!  The plan is to take the girls along with me and then keep my fingers crossed that they get along for the trip otherwise I may be just leaving them out on the Cape!  I made sure to book a hotel in Hyannis that has an indoor pool, free WiFi, free breakfast, and as a bonus it's within walking distance of the Cape Cod Mall so if that doesn't keep them happy, I don't know what will.

I'm hoping that while Jamie and I attempt to climb the Pilgrim's Monument in Provincetown so that I can get some pictures, that Amanda will look around at some of the many art galleries that are there and get some inspiration for new artwork. I'm not even going to ask her if she wants to do the monument with us as she's got a bit of a fear of heights - something I used to have but have surprisingly gotten over as I've gotten older.  Must be that whole "I need to take pictures!" thing that supersedes that whole "it's too high!" thing! I've only been to P'Town once so I'm looking forward to the trip as well as lunch at The Lobster Pot which I seem to recall as being very, very good!

So, I guess I'll go make a list of places that I want to wander to and then think about tossing some clothes in a suitcase!  Hope your Wednesday and the rest of the week is wonderful!