Meanwhile, Back On the Tip of Cape Ann ...

So ... y'all remember last week when I posted this picture of a place where I said I'd love to live which is located at the very tip of Bearskin Neck in Rockport?

My friend Barb did some research and turns out that it's a three bedroom, two bath place with a tower office that has a 360 degree view; I even found pictures on Craig's List showing that the inside was quite nice, too! Unfortunately though, the price tag to rent this little piece of heaven is $2,600 a month so obviously it's WAY out of my price range no matter how I crunch numbers.
So why am I posting it again?  Well because - believe it or not - I'm back up on the North Shore and on Friday night I went out to dinner with my friends Walt and Juli at a restaurant that turned out to be directly across the street from this very place.  Juli had made the reservations and it just happened to be one of those happy coincidences that I knew exactly where it was when she told me where we were going.

My Place By the Sea is most definitely BY the sea as you can see by the view that we had from our table.

Dinner started out with scrumptious Foccacia bread with an olive oil dip that was absolutely delicious.

For his entrée, Walt ordered the Prosciutto-Wrapped Halibut with Slow-Roasted Summer Vegetables ...

... while Juli and I both ordered the Lobster Club. Even though I wasn't head-over-heels in love with lobster when I had it at the Inn Victoria, I thought I should give New England's favorite a second try in a different incarnation which turned out to be very, very tasty though kind of hard to eat without making a huge mess.  It was tricky going but I eventually managed to devour the whole thing before we walked back down Bearskin Neck to the Shalin Liu Performance Center.

Rockport's performance hall is just as beautiful on the inside as it is on the outside and the acoustics - well, what can I say about the acoustics other than that they were perfect. I believe that you really could hear a pin drop if someone had done so on the stage and the view out of those windows that back the stage - absolutely gorgeous!  The picture below really doesn't do it justice but alas, no photos were allowed during the performance which is when the view and the sound really worked its magic to produce a wonderful, wonderful show. Juli went downstairs and took this second photo with her iPhone during intermission -
as you can see, it's just gorgeous there. 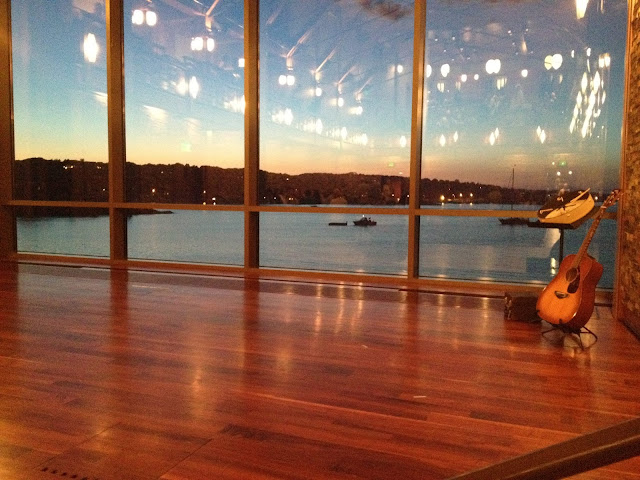 The group that we saw perform was Cantus, a men's A Cappella group from Minnesota that has been called "The premiere men's vocal ensemble in the United States" by Fanfare magazine and rightfully so as they are most definitely good and then some!
Just as a sample, here's a YouTube video of one of the songs they performed when we saw them; it gave me goosebumps as it was just that good, I kid you not but then again, I've always been a sucker for a man with a great voice!

All in all, it was a really nice Friday evening all the way around - good friends, good food, and good music all in a beautiful location. What more could a gal want?
Posted by Linda at 7/02/2012