Nosing Around in My HDHP

This has been the month for doctor's appointments for me. Not necessarily because I've needed all of them but because on July 1st the HDHP medical coverage that I have began its new fiscal year and I thought it would be a good idea to get a jump on getting my deductible paid.  For several years now I've participated in the HDHP that my company has offered and I get the sneaky feeling that this will be the year when I may need a few extra things done here or there and I want to make sure I've got a full year to get them all done.

If you're not familiar with the term HDHP, it's a high deductible health plan with lower premiums and higher deductibles than a traditional health plan. When they were going over plans at one of our annual health benefits meetings I decided that an HDHP might be the perfect plan for me as the representative said, "It's a great plan if you never go to the doctor and a pretty good plan if you go all the time." For the most part, I very rarely go to the doctor and take no prescription drugs so for me, a traditional health plan is money sort of wasted. I paid the deductibles every month no matter whether I went to the doctor or not and that was it, the money was gone. Poof!

With the high deductible health plan, I still pay a premium every month but it's a lower premium plus some of it goes into a health savings account along with whatever amount (up to a limit, of course) that I want to designate. The funds contributed to my account are not subject to federal income tax at the time of deposit and unlike a flexible spending account where if you don't use 'em, you lose 'em, the funds in my HSA roll over and accumulate from year to year. So what that means is that if I don't use any of the money in my HSA for any qualified medical expenses from one year to another, when there comes a year when I'm going to have to make the high deductible, I can use the money that has already been put aside and it doesn't cost me anything additional out-of-pocket.

The best part is that once I make that deductible for the year (in my case it's $2,000) everything else for the year is paid 100% so if I know there's going to be a year when I might need to have a lot done (like this year) it behooves me to have my appointments and meet my deductible early which is the long way around explaining why I've had a lot of doctor's appointments this month!

Truth be told, a lot of those appointments won't go towards my deductible as wellness benefits like mammograms, annual physicals, etc. are already covered 100% but the appointment I had last week with my ortho doc to discuss the tingling and numbness I've had going on in my left toes and left arm will go towards the deductible (I suspect my herniated discs are acting up again) and the two appointments that I had at Advanced Dermatology should also.

As I'd never had a skin check, my primary doctor thought it would be a good idea to have one so when I made the appointment to do that, 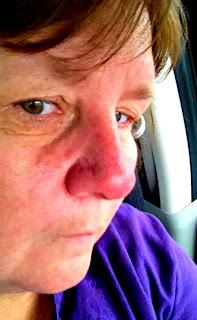 I was a bit surprised to find out that the annoying little spot I've had on the end of my nose for awhile was actually a precancerous thing. Yikes! It probably could have been taken care of that same appointment except for the fact that when I went, I was still a bit sunburned from my whale watch to Newburyport with Barb. Oops!

Fast forward three weeks and today was my return appointment.  As my nose was declared to be nice and healed from the sunburn, the doctor went ahead with freezing the precancerous spots with liquid nitrogen (a mere 200 degrees below 0 I was told!) which he said was going to sting - a lot. Guess what? It stung. A lot. He also said that it was going to make my eyes water and guess what? Yep, they did!

When I got out to the car and took a look in the rear view mirror I thought I bore a a striking resemblance to W.C. Fields so I did what any good blogger/Facebooker would do and snapped a picture of my nice red nose to share with the world. 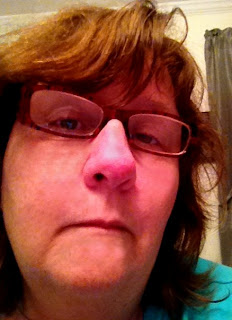 Fortunately the pain wasn't too bad, just some stinging and throbbing for about an hour or so but a couple of Tylenol seemed to take care of that and I was able to go about my day as normal giving no more thought to my nose than I usually do - which is pretty much never unless my allergies are acting up!

As of this writing, it doesn't hurt at all but it's still pretty red at the tip where they froze it though looking at the picture, I suspect it looks about as it usually does!  Just wait till it scabs over and falls off, though, I suspect that will be a whole different look!  Oh, not my whole nose of course!  Just the spots that were frozen!

So, with those two appointments over, a nerve conduction test looming for my left arm (and if I thought the liquid nitrogen hurt - ha!), and being of the proper age for a colonoscopy also, I suspect that my high deductible will be out of the way quite soon and then I've got the rest of the year to take care of any other problems that might crop up.  Though hopefully none will!  Unless that nerve study shows a return of carpal tunnel which I have a sneaky feeling may be the case. I guess we shall see!
Posted by Linda at 7/27/2012