The Boulevard of Broken Machines 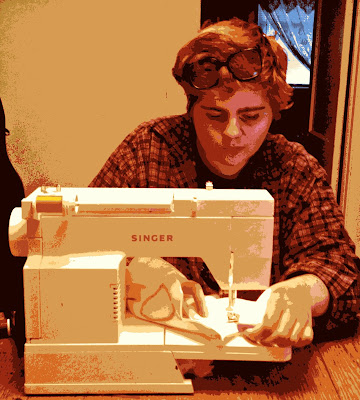 While this past week saw New England suffering from some pretty sultry summer weather (which has thankfully passed for now!), it also saw Amanda up to her eyeballs in a few sewing projects that had her stressed to the max while she spent hour after hour sitting at her trusty Singer sewing machine that had been given to her by a family friend. With Otakon, the annual fan convention in Baltimore that celebrates pretty much every type of pop culture you can imagine from comics to movies to television shows, fast approaching and costumes to get finished in time for the big event, Amanda was really starting to feel the pressure of deadlines combined with the full effects of Murphy's Law which had kicked in big time.  If anything could go wrong with the major project that she had to do, it did and it did it in a big way.

As I worked on my own projects writing about my latest travels with mini-Nathaniel to places like Old Sturbridge Village in Massachusetts, several historic homes in Gloucester, and a patriotic museum in Concord, Amanda slaved over her Singer and worked on what I dubbed to be "The Dress From Hell".  One of her friends had asked her if she could create a costume based on a character from the cartoon series "My Little Pony"; her friend wanted a dress looking like the one Pinkie Pie was wearing below and as Amanda owed her friend some money, she figured that was a good way to pay her back. 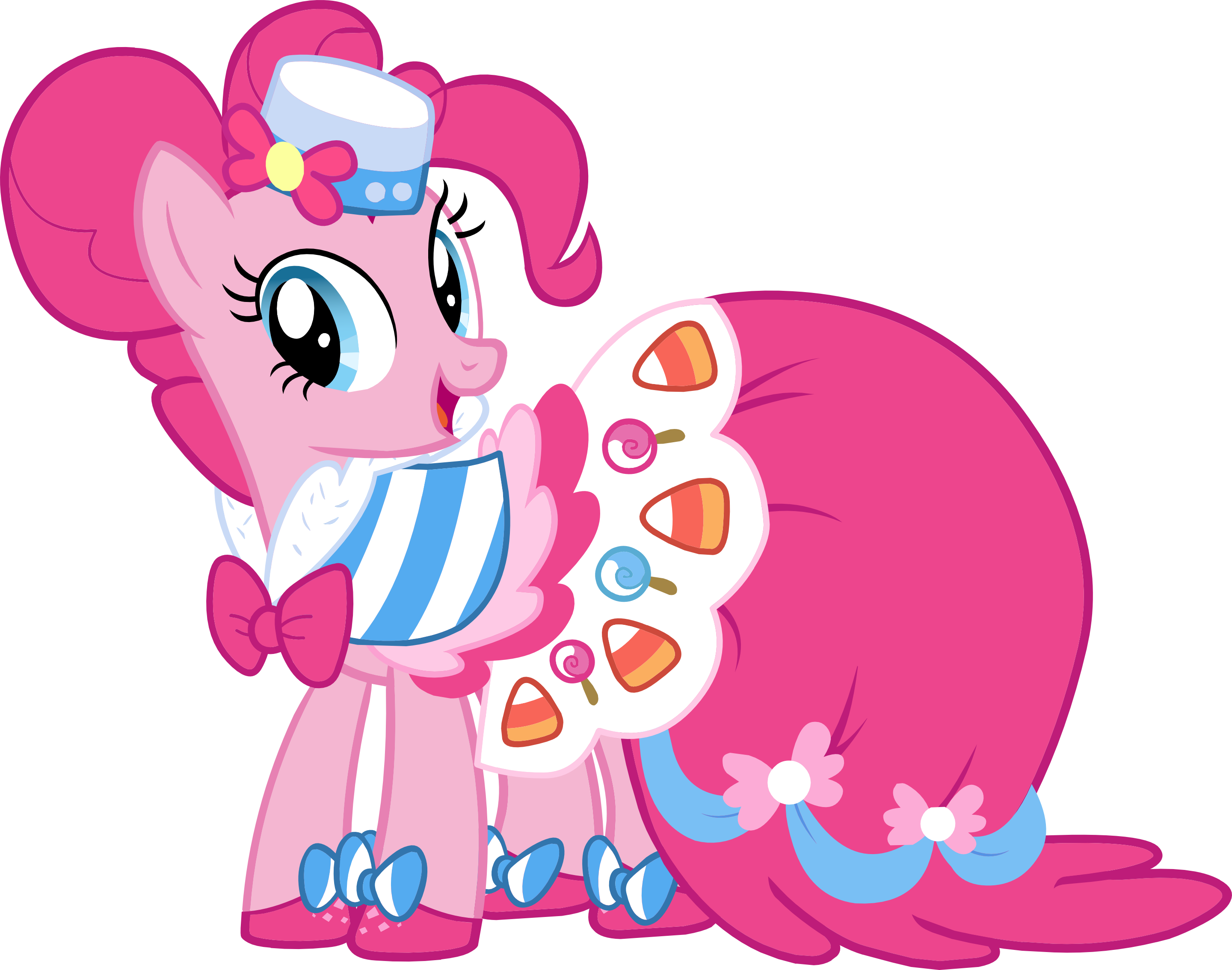 Even though it didn't look to Amanda like it was going to be that difficult of a project when she first envisioned it, that turned out not to be the case at all. With a row of embroidered candy corn and lollipops, scalloped hems, numerous bows, and three peplums below the vest and above the floor-length skirt along with a slew of other details, she really had her work cut out for her (no sewing pun intended!)  Add on the fact that the gal she was making the dress for made several major changes mid-project and Amanda was darn near ready for a ride to the local mental health facility halfway into the project.

To make matters worse, last Friday evening she had a bit of a scare when she was trying to bleach a pair of sand-colored shorts white and, following an on-line tutorial, mixed a bit of bleach and white vinegar together.  Double-checking another internet source she found that mixing the two together could result in chlorine gas and fatal poisoning which thankfully didn't happen but which raised her stress levels to near-critical.  Follow that up with our visit from the bat in the wee hours of the morning and I was definitely thinking of putting an ambulance on standby for her!  Not knowing what else to do, I had her take a couple of Tylenol PM and crash in my room as her stress was also causing her not to sleep and the kid really needed to get some sleep!

In the meantime though, "The Dress From Hell" waited and watched as Amanda - after having finally slept for a good solid eight hours - awoke to take on the candy corn and lollipop appliques.  Thankfully that part of it went more or less fairly well but when it got to the point where she had to gather the numerous peplums to sew to the vest, things started to go downhill again as the machine stitches just weren't gathering properly.  Having pity on her, I grabbed needle and thread and hand-sewed in basting stitches that were easier to gather together and soon work was back in progress.  Or I should say it was back in progress until her trusty Singer sewing machine had a fatal accident at 4:00 in the morning.

Having to go to work for my usual 16-hour double on Tuesday, I had gone to bed fairly late on Monday night  leaving Amanda to sew the peplums together after helping out with the whole gathering fiasco.  Around 4:00 I awoke to what I could have sworn was sobbing coming from the dining room where Amanda had been working and when I groggily opened my bedroom door to find out what was going on (please, Lord, not another bat!), I found Amanda in tears holding a metal piece from her sewing machine that had not just bent but had snapped clean in half.  Oh dear ... this wasn't good.  This wasn't good at all.

I finally convinced her to go to bed and try to get some sleep as there was nothing that could be done for it at that time of the morning.  I told her to take a few more Tylenol PM as she had a raging headache on top of everything else so she did and off to bed she sobbingly went while I was apparently up way too early for the long day that was ahead of me as there was no way I was going to be able to sleep as I wracked my brain as to how this particular dilemma was going to be solved. I had a sewing machine myself but it had been broken years ago by my ex-husband when he tried to sew material that was too heavy for it and all it did was spaghetti the bobbin thread so it was of no use and we sure couldn't afford to buy a new machine. I went to work not knowing how this project was ever going to end and hoping that Amanda could get some sleep and try to calm down.

Later in the day when Amanda finally woke up, she called me to tell me that a couple of her friends were coming down from Quincy, Massachusetts and they were bringing sewing machines with them.  The cavalry was on the way!  And they even brought pizza!  Having Kait and Melissa here to help out really, really helped - as did having access to a sewing machine that worked - as when I came home from work at 11:00 p.m. "The Dress From Hell" was almost totally completed. O frabjous day! Callooh! Callay! 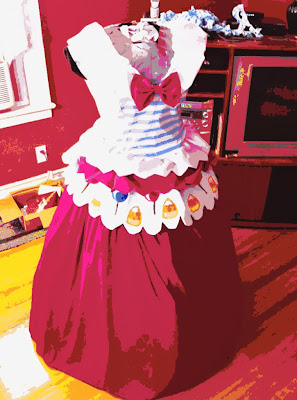 Above was the dreaded dress as I last saw it on the dress form in the living room (not posterized of course!) for when I got up the next morning to go to work it was packed into its shipping box and merely awaited my taking it to the Post Office after work and getting it the heck out of my house.  I'm pretty sure that I have never been so happy to mail a package in my entire life! While there I also mailed out another package to another of Amanda's friends in Alabama - another costume that she had made but that had been a cake-walk compared to "The Dress From Hell".

There were still projects to be done though as Amanda had another commission for a jacket that she felt would be quite easy compared to Pinkie Pie's ballgown.  As her machine was obviously still dead, Kait left her old Kenmore machine behind for Amanda to use when she returned to Quincy.  The Kenmore had had some problems in the past but Cait was confident that her Dad had fixed it but alas, that turned out not to be the case as shortly into the project, the machine started not picking up the bobbin thread.  Oh no, here we go again.

I contacted a work friend of mine that I knew had a machine to ask her if Amanda could borrow it; it was an older Singer that hadn't been out of the attic for a few years but Lori said she was welcome to use it so we hopped in the car and drove across town to pick it up.  Back home it turned out that - like the Kenmore - it was having bobbin problems and wouldn't pick up the thread at all no matter what we tried.  Fail. Again. Once again I went to bed trying to figure out what to do next as Amanda's stress levels started to climb again as she was really running out of time to get the jacket done for Otakon.  I was beginning to think that Otakon really meant "Convention that causes great stress" as that's exactly what was going on in my house!

On Saturday morning I sent out a plea for help on Facebook for anyone nearby with a sewing machine that Amanda might be able to borrow for a bit which was thankfully answered by another of the ladies that I work with.  Amy said she had a new Singer machine that she had only used maybe twice that Amanda was welcome to borrow so I woke her up and we made the short drive across town (again) to pick up what turned out to be one of those fancy-dancy new computerized machines that pretty much does everything at the touch of a button.  As she was heading off on vacation soon, Amy said that Amanda was more than welcome to hang on to the machine for a couple of weeks and sew to her heart's desire (though I'm thinking once she's done doing the costumes for Otakon she isn't going to have any desire to sew anything for awhile!)

When we got home with Amy's machine, Amanda took a look at the gathering of sewing machines that had accumulated in the dining room and said that it looked like a boulevard of broken machines - a take on Green Day's song "Boulevard of Broken Dreams".  I had to agree so snapped a photo because hey, that's what I do! 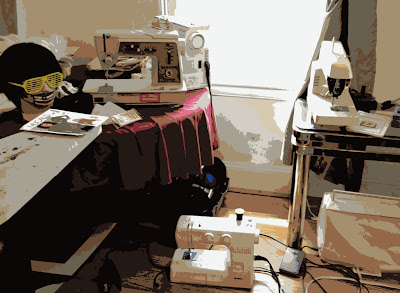 As of this writing, things are sewing along smoothly, Amanda's stress levels have returned to a manageable level and I think we should be okay until she leaves for Baltimore on Wednesday even though she still needs to make a pill box hat for Pinkie Pie's costume which, compared to everything else, should be a real walk in the park for her.

Oh, and as for "The Dress From Hell", I am very happy to say that it arrived safely in Pittsburgh and yesterday it's new owner wrote on Facebook, "It's here!!!! and it fits perfectly and looks amazing!!! :D i can't wait to wear it in a few days!" Phew!

Eventually we'll be getting Amanda a new sewing machine, especially if she wants to continue to do costume design and making, but in the meantime I'm a bit behind on my travel blogging and I just want to get through the rest of the week without any more stress or drama or disasters!  Hopefully Murphy and his darned law is off terrorizing someone else! Please!
Posted by Linda at 7/22/2012