Gale Martin, Author of "Grace Unexpected", Is Exactly How I Expected Her to Be!

One week ago today, I took some time off from work, picked up my friend Paula who happens to live in my small hometown of Canterbury, Connecticut, and pointed the car north to make the drive to the small town of Canterbury, New Hampshire. We weren't heading that way simply to see another small town named Canterbury - nope, we were on a mission.  A mission to at long last meet a woman whom I first got to know through this very blog way back in the Golden Glory Days of Blogging when memes were all the rage and there were awards for just about anything you could think of!

I can't pinpoint the exact time that I made Gale Martin's acquaintance but I'm guessing it was sometime in early 2007 when this blog was still in its infant stages. At that time Gale wrote a blog titled "Gem-osophy" - for which she won the Post of the Day Award from The Rising Blogger back in April of 2007 - and one of the things that she spoke of was the writing she was doing on a novel that had the working title "Savage Grace".

It was easy to tell that Gale had the chops to be a real bona fide novelist and if the finished product turned out to be anywhere near as witty and snarky and fun as the writing on her blog was, it was sure to be a bestseller.  However, trying to write both a blog and a novel was proving to be a little difficult - something that I have no trouble believing at all as I have problems just writing multiple blogs never mind trying to write a real book! 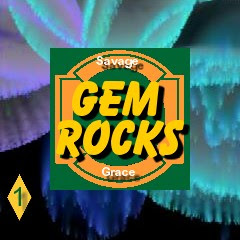 When Gale got bogged down in her writing, another blogger by the name of Frank (of Foxxfyrre's Honk'n'Holl'r) became the Chief Yell Leader and rallied a group of bloggers to become the Gale Martin Unofficial Cheering Squad  so that we could encourage Gale to keep working on her novel. That encouragement came in the form of a Gem Rocks! visual aid, encouraging posts from the UCS members, and even a "Dark and Stormy Meme" project designed to showcase some truly horrible writing that would hopefully provide Gale with a laugh or two while she showed us how the real writers did it.

Then the dust kinda settled and people sorta lost touch and though Gale continued to work on "Savage Grace", nothing really came of it for awhile. I don't believe that we necessarily stopped cheering for Gale but we did it separately rather than as a group.  I know I always hoped that "Grace" would eventually see the light of day in book form but I figured I was just going to have to be patient. Not one of my strong suits but I can pull it off occasionally!

In the meantime, while I was being patient, Gale had started another novel which turned out to be just as witty and snarky and fun as Grace was going to be except that this one was titled "Don Juan in Hankey, PA" and this one was accepted by a publisher who had the good sense to see what the rest of us already did when it came to Gale - she's a writer who brings her characters to life, who tells a story that you totally enjoy, and who writes dialog like (as my old Gram B would say) nobody's business!

Not only was "Don Juan in Hankey, PA" published but it was named a Finalist in the 2012 National Indie Excellence Awards for New Fiction which I've got to think is pretty darned good for a first novel and the reviews on Amazon.com have been nothing but glowing ...

"Hold onto your libretti! Gale Martin takes opera, and mayhem, to new heights in her laugh-out-loud, rollicking, confection of a novel. One part romance, one part mystery, DON JUAN IN HANKEY, PA will sweep you off your feet. You won't want to put it down!" - Nina Solomon, author of THE SINGLE WIFE

"A lively romp about a dysfunctional, small-town opera guild. Martin writes about the Pennsylvania Dutch and opera fanatics with the same verve that Garrison Keillor writes about Minnesota Lutherans and public radio." - Richard Fellinger, author of THEY HOVER OVER US

Gale had arrived and I couldn't have been happier for her if I tried! I absolutely loved "Don Juan in Hankey, PA" but I had to wonder ... what had happened to "Savage Grace"?  Well, I didn't have to wonder for very long at all for after the success of her first book, it wasn't long before it was decided that "Savage Grace" was finally going to be published only she wasn't savage anymore, she was unexpected.

"Grace Unexpected" - which had started out as an idea after Gale had visited one of the few remaining Shaker Villages in New England with her daughter - the very book that we members of the Unofficial Cheering Squad had chanted "Go Gale Go!" for - was now a reality!  Once again, I couldn't have been happier for Gale if I tried.  To know that all of that hard work and dedication and creativity hadn't gone for naught but had become the book that we always thought it would be just tickled me pink and then some as it validated that which I always knew to be true - that Gale Martin is a woman who can write and write well and make people laugh and take them out of their own worlds and into one that she has created for awhile with that writing.  And isn't that the true hallmark of a good writer? Someone who can tell a story so well that when you look up from the book you think, "Dang ... I've been reading for hours and never even noticed!"

So, anyway ... I have obviously digressed and lost track of my own story!  The reason that my friend Paula and I made the 2-1/2 hour journey from Connecticut to New Hampshire was because I was at long last going to have the opportunity to meet the woman that I had cheered on and admired and I was going to meet her in the very place where Grace had started - at the Canterbury Shaker Village in Canterbury, New Hampshire.

Even though the forecasts had been threatening rain, it turned out to be a beautiful day (though slightly warm at times) but I think the real beauty of the day was in meeting Gale and finding her to be exactly who I always thought she was - a woman with a great sense of humor, a terrific smile, a sharp wit, and just a lot of fun to be around.  The added bonus was that her husband Bill is the perfect partner for her and I could easily see why "Grace Unexpected" is dedicated to him "... with all of her love."  If we were cheering her on ourselves - and we were, we were! - I've got no doubt that Bill has always been Gale's biggest and bestest cheerleader and always will be.  They are the type of couple that when you meet them you think, "Yep, this is what a loving relationship is all about."  And then you go in the corner and cry because you don't have one yourself!  Well, no, not really ... I couldn't find a private corner ... and I didn't have any tissues ...

After introductions and chatting for awhile, Gale, Bill, Paula, and I took the guided tour of the Shaker Village and had a chance to go into the Meetinghouse where Grace has her epiphany (if you can call it that) along with a few of the other buildings that you can only see via guided tour.  Following that, we looked around a little bit and found the very spot that appears on the cover of "Grace Unexpected" - minus the daisies!

Oh wait - wrong book! That sneaky Don Juan just had to get in on the act!

There we go!  Gale doing her best imitation of Grace - though I made her face forward so that you could see her big smile rather than stand with her back to the camera!

Bill was nice enough to take a photo of Gale and I (which considering we were squinting into the sun didn't come out too badly!) so someday when Hollywood gets around to making movies of her two books - and they'd better if they know what's good for them! - I have photographic proof that I met Gale and "knew her when"!  Maybe a copy of the photo will get me into the opening night premiere! I have to say that over the years, I have been very, very fortunate to have met a lot of people in real life whom I first got to know via blogging and it is always a true pleasure and honor to do so. Gale was certainly no exception to that and I would have happily driven twice the distance to meet her and her wonderful husband but there was certainly something even more special about meeting Gale in the place that inspired Grace. And I'm not just saying that because I am mentioned in the Acknowledgements and there's even a character in the book named after me. Srsly. But I'm not saying anymore about that so you'll just have to get the book and read it to find out who and what my character is! Other than wicked awesome of course!

Thank you, Gale (and Bill!), for driving over from Vermont and getting lost and locking both sets of keys in your car and having to wait for the AAA guy to get there so that you could meet me in Canterbury!  Thank you for writing such a funny, witty, and fantastic book - two of them as a matter of fact!  And thank you not being unexpected at all but exactly the person that I expected you to be - and more!